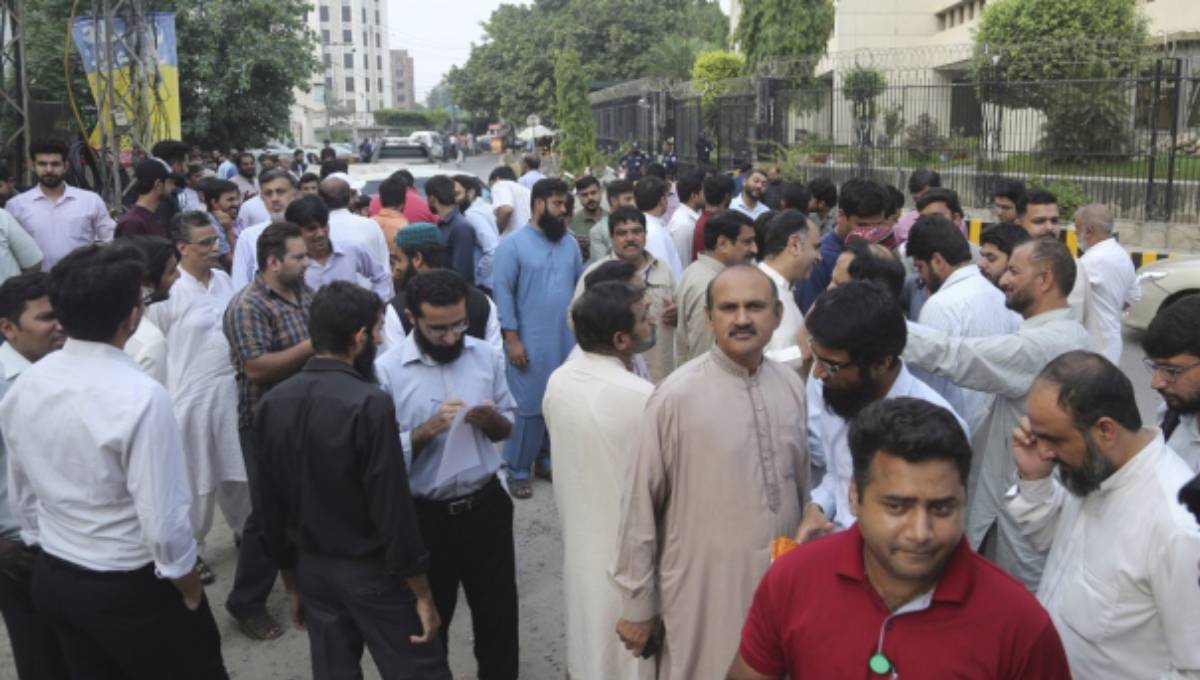 Photo: People stand outside after an earthquake is felt in Lahore, Pakistan, Tuesday, Sept. 24, 2019.

The quake badly damaged a key road leading to the town of Mirpur in the Pakistan-administered part of Kashmir and adjoining villages, where most of the damage was located.

Mushtaf Minhas, information minister in Pakistan-held Kashmir, said 22 people, including women and children, were killed in the quake, mostly due to collapsing roofs and walls.

“We are supplying tents, food and other essential items to earthquake-affected people. We are facing a tragedy but we will try our best to ensure the rehabilitation of affected people as soon as possible,” he told The Associated Press.

Mahboob Ahmed, a doctor at a village hospital near Mirpur, said they treated 700 people and most of them were later discharged or referred to the district’s main hospital, where better health facilities were available.

Raja Qaiser, a deputy commissioner, said rescuers were still transporting victims to hospitals in Mirpur. An emergency was declared in Pakistan-administered Kashmir.

He said a main road near Mirpur was also badly damaged, causing accidents and damaging buses and other vehicles.

An Associated Press reporter saw dozens of partially damaged homes along a road leading to Mirpur, where doctors were treating quake victims at open areas outside the city’s main government-run hospital due to a shortage of beds.

TV footage also showed cracked roads, damaged homes, shops and vehicles in Mirpur, where a breach at a main canal was submerging villages.

According to Pakistan’s Meteorological Department, the epicenter of the 5.8 magnitude quake was located near the mountainous city of Jehlum in eastern Punjab province. The earthquake shook walls across the country and left people waiting in the streets fearing aftershocks.

“The shallow earthquake was 10 kilometers (six miles) deep and that is why it caused so much damage in Mirpur in Kashmir,” which was not far away from the quake’s epicenter, meteorologist Muhammad Riaz said.

Residents in Islamabad were seen rushing out of multistory buildings into the streets.

Shortly after the tremor hit, Pakistan’s military dispatched troops and medical teams to the quake-affected area to assist civilian authorities in helping victims.

Authorities said helicopters will also be used if needed to evacuate people from the earthquake-affected area.

Some residents in Mirpur said shortly after the quake struck, they came out of their homes reciting verses from the Quran, Islam’s holy book.

“I was sitting in my shop when suddenly the walls started swaying. I knew that it is a strong earthquake. The moment I came out of my shop, its roof caved in,” one shop owner told Pakistan’s Geo news channel as he stood in a street littered with debris of houses and nearby damaged shops. The shop owner was not identified.

Mohammad Arif, whose home was damaged in Mirpur, said when the quake hit, he started shouting to alert his family.

“God saved me. God saved all of my family members, but our home was partially damaged,” he told Geo.

The temblor was also felt in the northwest and in many towns and cities in eastern Punjab province, but it caused no damages or casualties there.

A magnitude 7.6 quake in 2005 killed thousands of people in Pakistan and Kashmir.