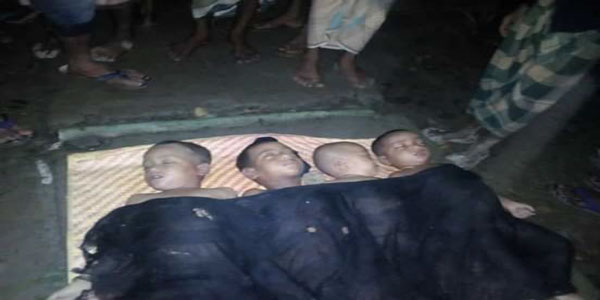 Sunamganj Correspondent : The bodies of five more people, who went missing in a boat capsize in Kaliakuta haor in Dirai upazila on Tuesday, were recovered on Wednesday, raising the death toll to Ten.

The deceased were identified as Shanta Moni, 3, daughter of Jasad, Rahitunnesa, 35, wife of Arju Ali, Asad, 5, son of Afzal Hossain and Karima Bibi, 78, wife of Nasibulla of Masimpur village while the identity of another one could not be known yet.

Belayet Hossain, additional superintendent of police, said ten people, including six children, went missing after the boat capsized in the waterbody while 21 managed to swim ashore.

Police recovered the bodies of four people on Tuesday night. They were Shamim, 2, son of Babul, Abir, 3, son of Badrul of Masimpur village, Azam, 2, son of Firoz Ali of Perua village and Sohan, son of Afzal Hossain of Noagram village in the upazila.