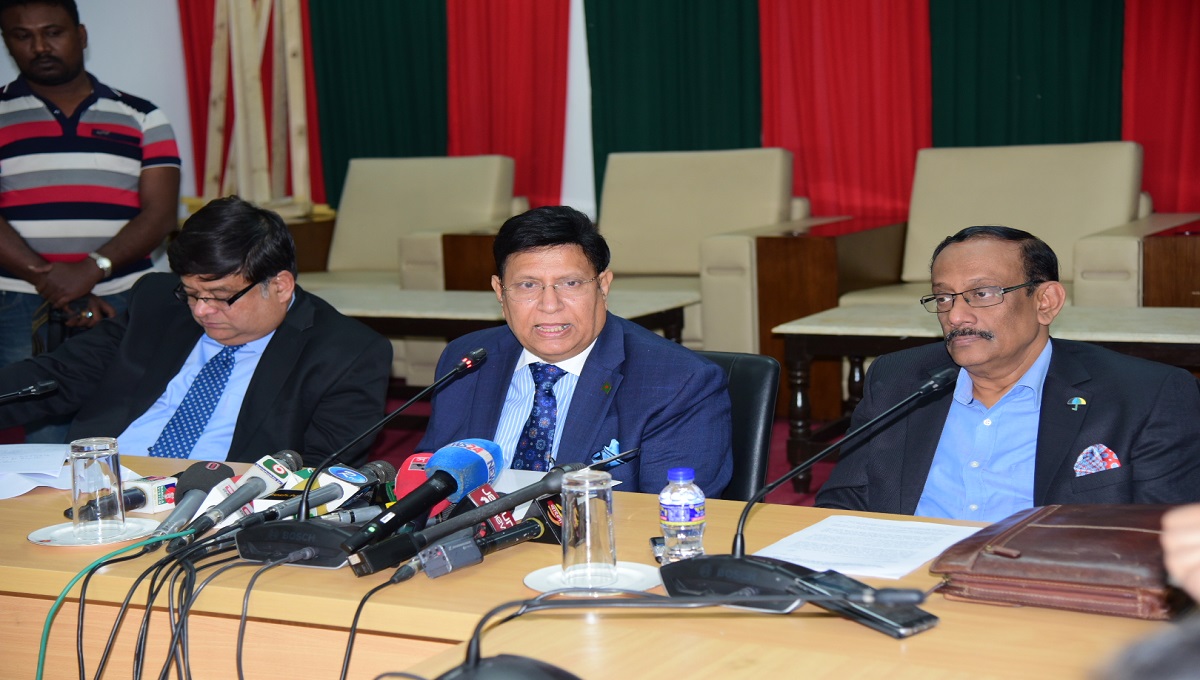 Dhaka, Oct 2 : Bangladesh will seek India’s cooperation for the safe repatriation of Rohingyas to their place of origin in the Rakhine State of Myanmar during Prime Minister Sheikh Hasina’s New Delhi visit.

Foreign Minister Dr AK Abdul Momen said this while briefing reporters at his ministry on Wednesday.

Bangladesh is now hosting over 1.1 million Rohingyas and China is already involved to help begin repatriation of Rohingyas.

He said all the issues related to Bangladesh-India bilateral relations will be discussed between Prime Minister Sheikh Hasina and her Indian counterpart on October 5.

Dr Momen said at least 10-12 instruments will be signed on bilateral issues though it is not yet finalised how many deals will exactly be signed.

Issues like bringing down border killings to a zero level, combating regional terrorism, anti-dumping, enhancing cooperation in energy and water sharing will be discussed during the meeting.

Dr Momen said the two prime ministers will talk about water-sharing of seven common rivers, including Teesta at the bilateral meeting,

He also said joint initiatives on ensuring maximum utilization of Ganges water-sharing agreement and ‘structured agreement’ on water-sharing of common rivers will be discussed.

Sheikh Hasina goes to New Delhi on Thursday on a four-day official visit.

A number of bilateral instruments are on the table for signing, aiming to take the relationship between the two neighbouring nations to the next level of cooperation.

Of the bilateral instruments, three documents are likely to be in the form of bilateral agreements, a diplomatic source told UNB mentioning that these are on sharing of White Shipping Information, Air Services and the SOP on the use of Chattogram and Mongla port for the movement of goods to and from India.

The MoUs, likely to be signed during the visit, are focusing on youths and sports, BSTI, cultural exchange programme, textiles and jutes, trade remedial measures, coastal surveillance system, film co-production between the two countries, oceanographic research, Mirsarai SEZ, cooperation in the hydrocarbon sector, disaster relief, establishment of permanent office of EXIM Bank of India, ICT and cooperation in supporting start-ups-innovations and incubations.

The Prime Minister will join the summit of World Economic Forum (WEF) as the chief guest.

Over 800 leaders from 40 countries will take part in the India Economic Summit 2019 to be held on October 3-4 in New Delhi.

A VVIP flight of Biman Bangladesh Airlines carrying the Prime Minister and her entourage will depart Hazrat Shahjalal International Airport at 8am on the day, which is scheduled to land at Palam Air Force Station, New Delhi at 10am (local time).

During the visit, the Prime Minister will stay at Hotel Taj Mahal.

On Thursday, Sheikh Hasina will attend the WEF Country Strategy Dialogue on Bangladesh at Hotel Taj Palace and join a reception to be arranged in her honour at Bangladesh High Commission in New Delhi.

On October 5, Sheikh Hasina will join a bilateral meeting with Indian Prime Minister Narendra Modi at 11:30am and attend official lunch at 1pm at Hyderabad House, and meet Indian President Ram Nath Kovind at 4:30pm at Rashtrapati Bhavan.

During the bilateral meeting, the two prime ministers will jointly launch some projects, while agreements and Memorandum of Understanding (MoU) are expected to be exchanged between the two sides.

Various issues of bilateral concerns, particularly the India National Register of Citizens (NRC) and water-sharing of the common rivers, including Teesta will be discussed at the bilateral meeting, Foreign Minister Dr AK Abdul Momen hinted while briefing reporters after a recent bilateral meeting held between Sheikh Hasina and Narendra Modi in New York.

On Sunday, President of Indian National Congress Sonia Gandhi and Shyam Benegal, Director of Film on Father of the Nation Bangabandhu Sheikh Mujibur Rahman, will separately meet the Prime Minister.

On October 6, Hasina will leave Delhi for home at 8pm (local time) by a VVIP flight of the Biman Bangladesh Airlines, which will land at Hazrat Shahjalal International Airport at 11pm (BST).