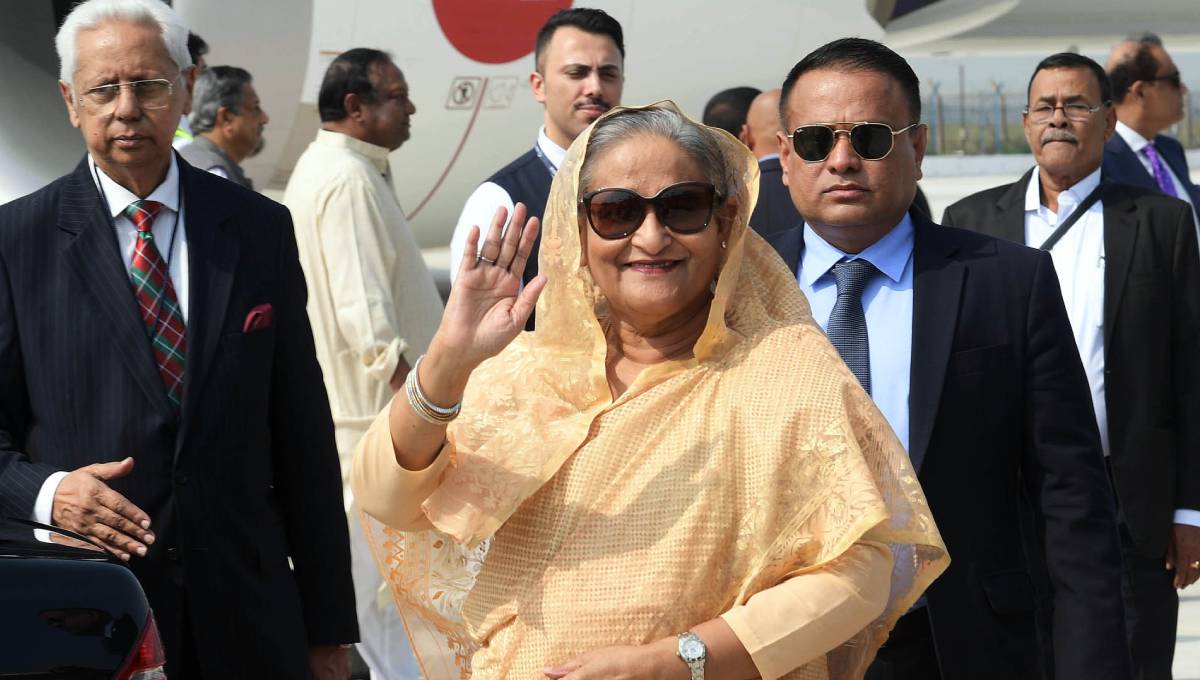 A VVIP flight of Biman Bangladesh Airlines carrying the Prime Minister and her entourage departed from Hazrat Shahjalal International Airport at 8:15am. The flight landed at Palam Air Force Station, New Delhi at 9:45am (local time).

She will attend the WEF Country Strategy Dialogue on Bangladesh on October 3 and the WEF Closing Plenary on October 4, said sources at the Prime Minister’s Office.

Over 800 leaders from 40 countries will take part in the India Economic Summit 2019 to be held on October 3-4 in New Delhi.

During the visit, the Prime Minister will stay at Hotel Taj Mahal.

A red carpet was rolled out for the Prime Minister at the airport. Photo: PID

On Thursday, she will attend the WEF Country Strategy Dialogue on Bangladesh at Hotel Taj Palace and join a reception to be arranged in her honour at Bangladesh High Commission in New Delhi.

On Friday (Oct 4), she will attend an interactive session with select CEOs of India and Inauguration of India-Bangladesh Business Forum (IBBF) at ITC Maurya and WEF Closing Plenary at Hotel Taj Palace. Deputy Prime Minister of Singapore Heng Swee Keat will call on Sheikh Hasina on Friday evening.

On October 5, the Prime Minister will join a bilateral meeting with her Indian counterpart at 11:30am and attend the official lunch at 1pm at Hyderabad House, and meet Indian President Kovind at 4:30pm at Rashtrapati Bhavan.

During the bilateral meeting, the two prime ministers will jointly launch some projects, while agreements and Memorandum of Understanding (MoU) are expected to be exchanged between the two sides.

In the morning, Indian External Affairs Minister Dr Subrahmanyam Jaishankar will meet Sheikh Hasina at the place of her residence.

On Sunday, President of Indian National Congress Sonia Gandhi and noted film director Shyam Benegal, who was assigned to make a Bangla film on the life and works of Father of the Nation Bangabandhu Sheikh Mujibur Rahman, will separately meet the Prime Minister.

On October 6, Sheikh Hasina will leave Delhi for home at 8pm (local time) by a VVIP flight of Biman which will land in Dhaka at 11pm (BdST).