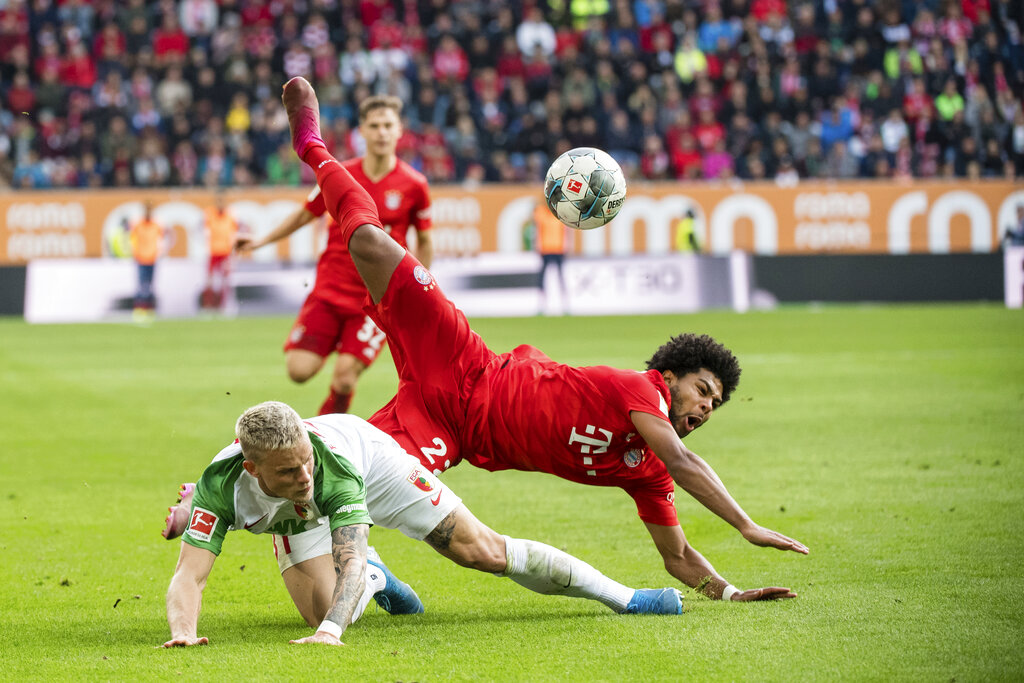 
Berlin, Oct 20 : Augsburg substitute Alfred Finnbogason scored in injury time to hold Bayern Munich to a 2-2 draw and prevent the German champion from reclaiming the top spot in the Bundesliga on Saturday.

Goals from Robert Lewandowski and Serge Gnabry had put Bayern on course to move a point ahead of Borussia Mönchengladbach, but Finnbogason ensured they dropped points for the second consecutive game and remained a point behind the league leaders.

Gladbach later lost 1-0 at Borussia Dortmund, which held on to end a run of three consecutive 2-2 draws to move level on 15 points with Bayern and Leipzig.

Gladbach still leads with 16 points, ahead of Wolfsburg on goal difference, after eight games played. Wolfsburg, the only unbeaten team remaining in the league, fought back to earn a 1-1 draw with Leipzig earlier Saturday.

Bayern, Dortmund and Leipzig all have 15 points, one more than Schalke, which can move top on Sunday with a win at Hoffenheim.

Bayern, the seven-time defending champion, was stunned when Augsburg’s Marco Richter scored in the first minute after a one-two with Rani Khedira.

But Gnabry crossed for Lewandowski to equalize in the 14th. It ensured the Polish striker matched Pierre-Emerick Aubameyang’s Bundesliga record of scoring in each of the first eight games of the season. The former Dortmund striker managed it in 2015. Lewandowski also became the first to score in eight consecutive league games for Bayern since Dutch forward Roy Makaay in 2005.

Bayern’s first-half performance was marred by many small mistakes, though both sides missed good chances to score.

Gnabry made no mistake four minutes into the second half with a fine individual goal, but the visitors were stunned again when Sergio Cordova set up Finnbogason’s late leveler.

There was further bad news for Niko Kovac’s team as defender Niklas Süle was forced off early with an injury and left the dressing room on crutches.

Bayern began the game with former Germany forward Thomas Müller on the bench for the sixth consecutive game, while midfielder Javi Martínez started for the first time this season.

Marco Reus’s second-half strike was enough for Dortmund to end its three-game winless streak, though the home side needed to overcome two disallowed goals and its own suspension of England forward Jadon Sancho for disciplinary reasons.

Thorgan Hazard sent Reus through to score in the 58th minute, but Dortmund was grateful to reserve goalkeeper Marwin Hitz for securing the win after he came on for the injured Roman Bürki.

“Jadon is a decent lad. He’s still very young, however. Sometimes he tests the limits. It wasn’t an easy decision for us today, but we had no alternative,” Dortmund sporting director Michael Zorc said before kickoff.

Gladbach was left to rue two penalty decisions that didn’t go its way, while coach Marco Rose was booked in injury time for protesting.

Union Berlin ended a run of four defeats since beating Dortmund with a 2-0 win at home over Freiburg.

Marius Bülter got the home side off to a flying start when he let fly inside the top right corner in the second minute, while Marcus Ingvartsen sealed the result with a fine dipping shot under the crossbar in the 84th.

2019-10-20
Enamul Haque Renu
Previous: After Priyanka, Parineeti Chopra next in line to get married
Next: 8 killed after landslide hits 3 vehicles in Indis’s Uttarakhand