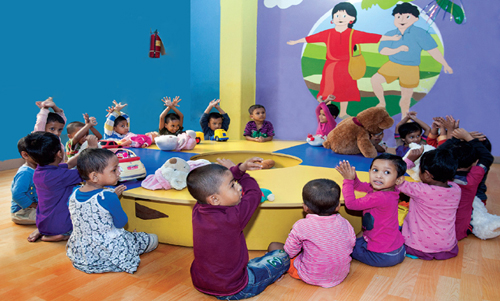 Day care centers have been introduced in three Readymade garments (RMG) in Dhaka’s Mirpur and Savar areas and those became blessings for hundreds of mothers, having pre-school children, working in these factories.
Evince Garments Limited in Mirpur and Quazi Abedin Tex Limited and JK Group in Savar have introduced the day care centers named Proyash to ensure safety for garment workers’ children and increase production of the factories.

Atia Khanam, a worker of Evince Garments Limited said the free of cost day care center has given her daughter a safe environment and at the same time, it helped her to be tension-free and work attentively in the factory.

Another worker mother of the same factory Rina Akter said she was over the moon when she became mother for the first time. After watching the face of her baby girl, all the sadness of Rina had disappeared. Rina used to spend all her days talking, singing and playing with the baby girl until returning to work after a six-month maternity leave.

In the beginning of the return, Rina used to be late to join in work and could not concentrate on her duty thinking of her daughter Nuha. Even few months later, the 21-year-old woman decided to resign after some consecutive absences in work, because she did not have any

option to keep the baby in a safe place during the work hours. Besides, there was no day care center at her workplace.

But Rina did not have to resign as a day care center was launched at her factory, few weeks after she had been facing the difficulties. “All my worries came to an end when I got the day care center facility. Now I can keep my daughter there without having any tension. I can work more comfortably which I couldn’t before,” she added.Rina said, “Even, I can come to see my daughter during my breaks as the day care center is situated at the downstairs of my office. I feel like that I am working all the day keeping my daughter with me.”

Like her, many working mothers of Evince and other two garment factories in Savar-Quazi Abedin Tex Limited and JK Group-felt relieve after getting the day care facilities.

Yeakub Hossain, coordinator of the project, said in 2016, Proyash introduced a mechanism of day care center at the garment factories, and then provided support to the authorities of the factories to run the centers.

“The aim of the initiative was to support the mothers among the garment workers so that they can ensure safety for their children and increase their productivity,” he added.