Ziaur, Khaleda, Tarique all are killers, she says 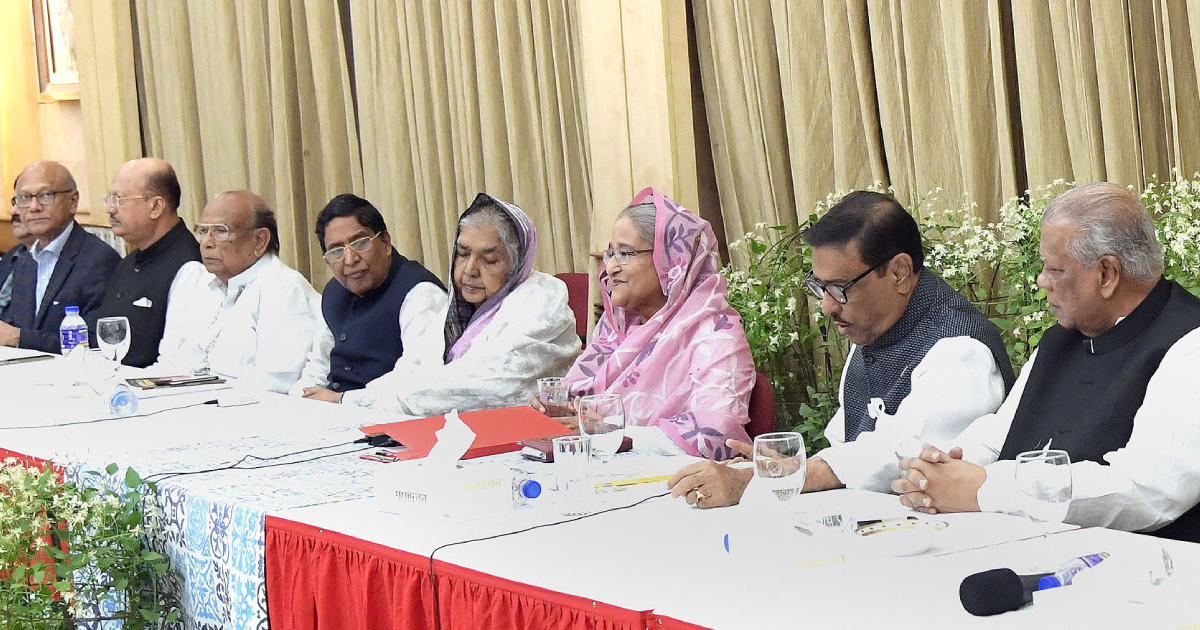 Prime Minister Sheikh Hasina on Wednesday called upon all to remain alert so that bribe takers, interest mongers, orphan’s money looters, money launderers, grenade and bomb attackers, and arson terrorists cannot return to power as they will destroy the country.

“This is my appeal to the nation to keep these elements away from state power,” she said while speaking at a meeting of Awami League National Committee at her official residence Ganobhaban.

The Prime Minister further said, “Ziaur Rahman, Khaleda Zia and Tarique Rahman all are killers…they’re the family of killers. They just know killing, corruption and money embezzlement, nothing else.”

Sheikh Hasina, the chief of the ruling Awami League, said Awami League does not believe in the politics of vengeance.

She said Khaleda Zia is now in jail, not in any political case, but in a graft case as it was a matter of misappropriation of orphans’ money, and the caretaker government had lodged the case.

“We’ve provided a maid for her in the jail…this is very much rare in the world,” she said.

Talking about the health condition of BNP chief Khaleda Zia, she said her knee problem is a very old one. “After coming to power in 1991, she underwent knee-cup surgery in the USA and she did the same later in Saudi Arabia,” she said.

Hasina mentioned Khaleda Zia was seen sitting in a wheelchair while doing shopping abroad and performing hajj. “At that time, Falu (Mosaddeq Hossain Falu) pushed the wheelchair,” she added.

The Prime Minister thanked the people of the country for not forgetting the miserable misrules of BNP-Jamaat clique during their regimes and did not vote for them in the 2008 election.

“As a result, BNP got only 29 seats in the 2007 election, many people now forget this matter,” Hasina said.

She said how the party which bagged only 29 seats in the 2008 election and involved in killings and arson attacks could hope people will vote for them and put them in power again!

Regarding the 2014 election boycott, Hasina said the aim of BNP was to block the ongoing democratic process of the country which they always do. “They never believe in the power of people and democracy.”

About the debacle in the last general election, the Prime Minister said BNP was very much sure about their defeat and nomination trading cost a lot for them.

“They sold nomination papers to more than one candidate for one constituency… they took the election as a matter of business,” she said.

Hasina asked all to see that the government is conducting its drive against terrorism and it will continue for sure.

She called Khaleda Zia as the “godmother of terrorism” in the country as terrorists got state patronage patronisation during her regime.

“She [Khaleda] pampered Bangla Bhai like terrorist…she was behind killing people through arson attacks, and what could be the bigger terrorism than this!” Hasina wondered.

“We’re advancing the country…Awami League in power means development of the country and welfare of its people, and honour for Bangladesh in the international arena,” she said.

She also said the government and the Awami League will celebrate the birth centenary of Bangabandhu and the 50th anniversary of Bangladesh’s Independence and the government has announced March 17, 2020 to March 26, 2021 as Mujib Borsho for that.