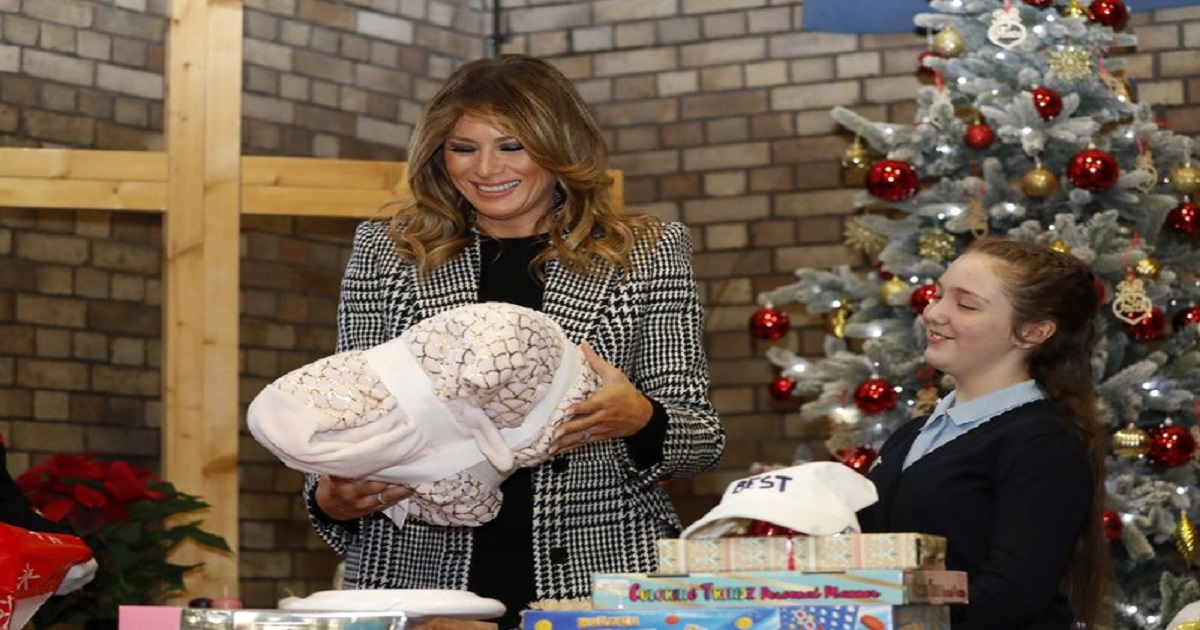 London, December 05 : London fifth graders sang “All I Want for Christmas is You” after Melania Trump added to their merriment Wednesday by joining them to make wreaths and ornaments at a Salvation Army center.

At the center in the Clapton neighborhood of east London, Mrs. Trump helped attach pine cones to a wreath covered in yellow tinsel.

The first lady nodded in apparent enjoyment as the pupils serenaded her, then clapped and appeared to say “bravo” when they finished the song.

Mrs. Trump also donated presents for the charity’s holiday drive, including white baseball caps, white Frisbees and soccer balls all stamped with the logo of her “Be Best” youth initiative.

She gave the fifth graders “Be Best” ornaments as gifts before she departed.

The appearance in London was a vast improvement over the reception she received last week in Baltimore, when many middle and high school students booed her address at an anti-drug summit.

The first lady’s husband, President Donald Trump, had upset many residents with disparaging comments about their Maryland hometown.

Mrs. Trump visited the Salvation Army center in London while Trump attended a NATO leaders’ meeting in nearby Watsford. She was accompanied by Suzanne Johnson, the wife of Woody Johnson, the U.S. ambassador to the United Kingdom.

The students, who attend the Baden Powell School, were excited to meet both women.

Ten-year-old Isabelle Bates said afterward that she and the first lady talked about what Christmas is like in the U.S. and how she decorates her tree.

Bates said she was surprised Mrs. Trump had never tasted a mince pie.

“She said she was going to try one tonight,” Bates said of the pie, filled with a mixture of dried fruits and spices and traditionally served during the Christmas season.

‘”I thought she was really fun,” Bates said. ”Everyone was expecting her to be very grumpy, but she was actually very nice.”

Another student, Quiana Mullings, 9, said she thought the first lady’s face make-up “‘was a bit much.” Mrs. Trump is a former fashion model who was born in Slovenia.

”It made her look sad but actually she was very happy,” Mullings said.