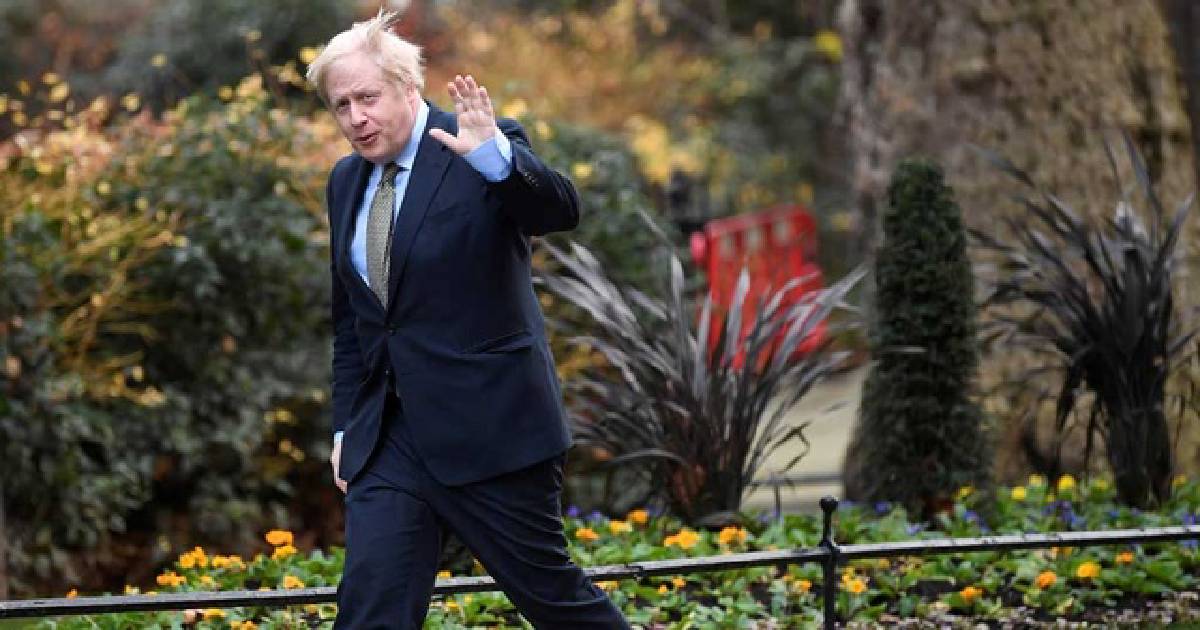 The Latest on Britain’s Brexit election (all times local):

U.K. Prime Minister Boris Johnson has arrived at Buckingham Palace for a meeting with Queen Elizabeth II to form a new government in the wake of his Conservative Party’s emphatic election victory.

Johnson travelled to Buckingham Palace for the constitutional ritual after securing the largest Conservative majority since Margaret Thatcher’s third straight victory in 1987.

Johnson’s victory paves the way for Britain departure from the European Union by Jan. 31.

With one constituency result to be announced, the Conservatives have won 364 seats in the 650-member House of Commons.

German business groups are relieved that Britain’s election has lifted uncertainty over when and whether the U.K. will leave the European Union. But they’re warning that its departure isn’t the end of the story.

Joachim Lang, the chief executive of the Federation of German Industries, said no German company wants Brexit but “our companies are breathing a sigh of relief that there is finally a mandate to accept the withdrawal agreement.”

Lang said there needs to be a clear course in London not just on Britain’s actual departure but on the terms of its future relationship with the EU.

The Association of German Chambers of Commerce and Industry said that Britain has slipped from Germany’s No. 5 trading partner to No. 7 since it voted to leave the EU in 2016.

Its chairman, Eric Schweitzer, said that German companies in Britain are “restrained in their investment and employment plans” because of uncertainty over the future relationship.

Prominent European center-left politicians are lamenting the opposition Labour Party’s defeat in the British election, though one is suggesting that the party’s ambiguous stance on Brexit was to blame.

Labour leader Jeremy Corbyn said during the campaign that he would be neutral in any future referendum on Britain’s membership of the European Union — a stance that caused much confusion.

Swedish Prime Minister Stefan Lofven said in Brussels at a summit of EU leaders that “to me as a Social Democrat, it’s sad. But that’s how it is.”

Germany’s minister for Europe, Michael Roth, had a blunter verdict on Labour’s campaign. In a tweet addressed to “our British friends,” he wrote that social democrats “should never be neutral” when it comes to Europe.

He added: “Progressives are & remain Internationalists & passionate Europeans. If you don’t get it, you will go down. Really sorry!”

With all but one of the U.K. constituency results in, Prime Minister Boris Johnson’s Conservatives have won 364 of the 650 seats in the House of Commons, ensuring it will form a majority government. That’s up 47 on the 2017 election. Meanwhile, Labour lost 59 seats and has 203, its worst showing since 1935.

U.K. markets have reacted positively to the British election results that have handed Boris Johnson’s Conservatives a majority in Parliament.

The prevailing view among investors is that the results have eased, if not quite erased, some of the uncertainty that has been hobbling the British economy ever since the country voted to leave the European Union in June 2016.

Johnson’s main message during the campaign was “get Brexit done.” The majority will allow him to get Britain out of the EU by the scheduled departure date by Jan. 31.

The pound and British stocks jumped higher . The currency spiked 2 cents against the dollar to $1.3450 late Thursday, when the first exit polls were made public, and held onto its gains. The FTSE 100 index of leading British shares rose 1.6% upon opening on Friday.

Longer term, it still remains unclear how Johnson will steer the economy, particularly since so much of Britain’s future trade relations remain to be negotiated once it has left the EU.

EU leaders are gathering to discuss Britain’s departure from the bloc amid some relief that Prime Minister Boris Johnson has a clear majority in Parliament to drive his Brexit divorce deal through.

While many leaders are saddened to see the U.K. leave, most appear to be breathing a sigh of relief that they can now get on with European business.

Britain is due to leave the EU by Jan. 31 and talks can then commence over the future trading arrangements. After Brexit, Britain will remain in the EU’s tariff-free single market until the end of 2020.

After congratulating Johnson on his victory, new EU Council President Charles Michel said that “we expect as soon as possible the vote by the British parliament on the withdrawal agreement.”

Regarding the future relationship, Michel said the EU is ready to negotiate “close cooperation in the future with the U.K.”

British Prime Minister Boris Johnson says the largest Conservative majority since the 1980s shows that getting Brexit done has now proved to be the will of the British people.

In a jubilant speech to party supporters, Johnson stressed that Britain will leave the European Union by Jan. 31.

Johnson also said that his government has to represent all corners of the United Kingdom. The Conservatives won a number of seats that had voted for the main opposition Labour Party for decades.

Results pouring in early Friday showed Prime Minister Boris Johnson’s Conservatives easily winning at least 363 of the 650 seats in the House of Commons, ensuring it will form a majority government.

The leader of Britain’s centrist Liberal Democrats has stepped down after losing her own seat on a disappointing election night for the party.

The pro-EU party had hoped that its staunch opposition to Brexit would help it build on the 20 seats it held before Thursday’s general election but in the end only won about a dozen of the 650 seats in Parliament.

The Liberal Democrats say lawmakers Ed Davey and Sal Brinton, a Liberal Democrat in the House of Lords, would become joint chiefs of the party until a leadership contest is held next year.

Results pouring in early Friday showed Prime Minister Boris Johnson’s Conservatives easily winning at least 360 of the 650 seats in the House of Commons, ensuring it will form a majority government.

The American president has taken to Twitter — where else? — to congratulate British Prime Minister Boris Johnson on “his great WIN” in the U.K.’s general election.

Donald Trump also wrote that “Britain and the United States will now be free to strike a massive new Trade Deal after BREXIT.”

Trump claimed that such a trade deal “has the potential to be far bigger and more lucrative” than any trade deal with the European Union. Right now, however, the 28-nation bloc is Britain’s largest trading partner.

Results pouring in early Friday showed Johnson’s Conservatives easily winning at least 358 of the 650 seats in the House of Commons, ensuring it will form a majority government.

Britain’s election was a flat-out disaster for left-wing Labour leader Jeremy Corbyn, who faced calls for his resignation.

Results pouring in early Friday showed a substantial shift in support to the Conservatives from Labour. Prime Minister Boris Johnson’s Conservatives easily won more than 326 of the 650 seats in the House of Commons, ensuring it will form a majority government.

Corbyn called the result “very disappointing” for his party. He said he would not lead Labour into another election but would stay on as the party reflected on what went wrong.

Britain’s Conservative Party has reached a total of 326 seats in the House of Commons, ensuring it will form a majority government.

Counts by broadcasters BBC, ITV and Sky News say the party has reached the threshold, with results from dozens of seats still to come.

Conservative Prime Minister Boris Johnson has called the election “historic.” He ran on a promise to take Britain out of the European Union by Jan. 31 if he won a majority.

The Conservatives’ “Get Brexit done” message helped them win previously Labour-held seats in parts of the country that voted in 2016 to leave the EU.

The leader of the Scottish National Party says her party’s gains in the British election give her a “renewed, refreshed, strengthened mandate” to push for a new referendum on Scottish independence.

Nicola Sturgeon told the BBC in early Friday that despite Boris Johnson’s Conservative Party being on course to win a solid majority in Parliament, he has “no right” to take Scotland out of the European Union. Scotland voted overwhelmingly against Brexit in the 2016 referendum.

Sturgeon said Johnson can’t block the Scottish people from “choosing their own future.” She conceded that Johnson now has “a mandate to take England out of the EU but he must accept that I have a mandate to give Scotland a choice for an alternative future.”

Scotland voted against independence five years ago in what was billed as a once-in-a-generation referendum.

The leader of Britain’s Liberal Democrats, Jo Swinson, has lost her seat in Parliament, while her party is struggling to make election gains.

Swinson was narrowly defeated in her Dunbartonshire East constituency by the Scottish National Party.

The pro-EU Liberal Democrats had high hopes of gaining new seats in Britain’s election because of its strongly pro-EU stance. But so far it looks likely to only win a dozen or so of the 650 House of Commons seats — fewer than it held before the election.

Prime Minister Boris Johnson’s Conservatives are on course to capture a solid majority in Thursday’s vote. Swinson said many people in Britain would feel “dread and dismay” at the election outcome, but that the Liberal Democrats would continue to “stand up for hope.”

British Prime Minister Boris Johnson says it looks like his Conservative Party has won “a powerful new mandate to get Brexit done” in the country’s general election.

He says the work of delivering Brexit will begin as soon as all the results are in from Thursday’s vote.

Johnson called the election “historic” as he was announced the winner of his Uxbridge constituency in suburban London. The Conservatives appear to be on course to win a solid majority of the 650 seats in the House of Commons.

His main rival, the opposition Labour Party, looked to be facing a notably heavy defeat, losing dozens of seats.