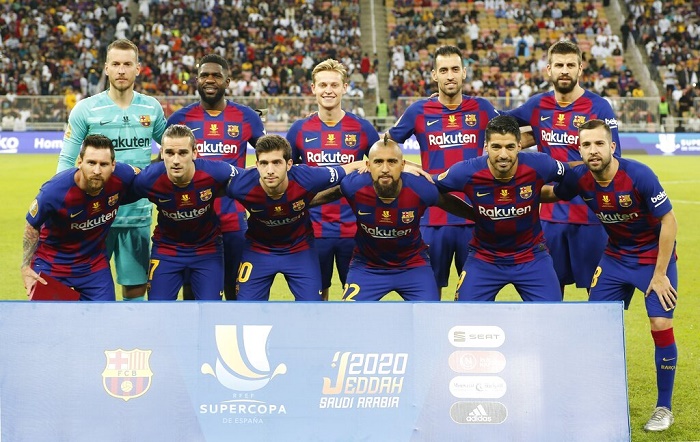 aLa Liga leaders Barcelona have chalked up a victory over rivals Real Madrid after establishing a record gap between first and second place in the latest Deloitte Football Money League.
Barcelona topped the 2018/2019 earnings table with 840.8 million euros ($937 million), a record 83.5 million euros ahead of Real (757.3 million euros), while Manchester United, the highest-placed British club in third, earned 711.5 million euros (o627.1 million) for 2018-19.

Barcelona leading the pack is down to bringing merchandising and licensing activities in-house, according to Deloitte.

“Barca are a clear example of a club adapting to changing market conditions, reducing the reliance on broadcast revenue and focusing on growing revenues within its control,” Dan Jones, partner in the Sports Business Group at Deloitte, told the Press Association news agency.

“The club’s commercial operation generated 383.5m euros of revenue, which is more than the total revenue of the 12th-placed club in this year’s Money League.

“With the club expecting further growth of 30 million euros in commercial revenues and total revenue of almost 880m euros in 2019-20, we expect them to retain the top spot in next year’s edition.”

United’s place as number one English club — a position they have held since the first Money League survey in 1996-97 — is in peril because they are forecasting reduced revenues of between o560-580 million for 2019-20, partly because they failed to qualify for this season’s Champions League.– ‘United under pressure’ –

City, who are sixth in the list while Liverpool are seventh, trail United by just under 101 million euros (o89 million).

An indication of how much ground Abu Dhabi-backed City have made up is that they were o200 million adrift of United 10 years ago.

However, they were overtaken in the latest study by Qatari-owned Paris Saint-Germain, who moved into fifth place.

“United have been the top English club since we started the Money League but that could come under a bit of pressure when we do it in 2021,” Jones said.

“That will cover this season when Liverpool are having a tremendous season on the pitch, so we think there’s a possibility of United losing that number one position.

“Part of that will ride on how the rest of this season goes, if City or Liverpool go deep into the Champions League.

“If you think about where we were 10 years ago, the idea that City would overhaul United in financial terms would have seemed far-fetched.”

In all there are eight Premier League clubs in the Money League top 20, more than any other country, and all the clubs hail from Europe’s big five leagues of England, France, Germany, Italy and Spain.