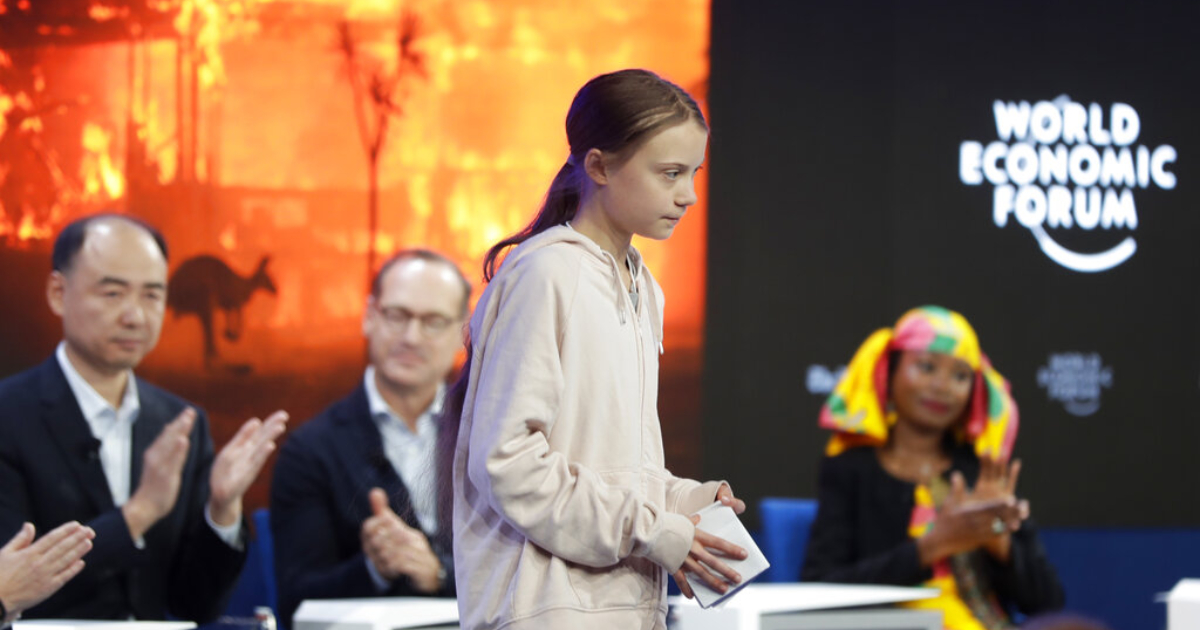 But Trump said Tuesday as he met with Pakistan’s leader in Davos, Switzerland, that he expects to reach a deal with Europe. He met earlier with Ursula von der Leyen, the new president of the European Commission. Trump says they had a “very good talk.” He did not say if they discussed the U.S. auto tariff threat.

He adds that Europe knows they “have to do something” and that, if they’re fair “we’re not going to have a problem.”

The president commented after telling The Wall Street Journal in an interview Tuesday during the World Economic Forum in Davos that he’s serious about imposing tariffs in the absence of a trade agreement with the EU.

In an interview with The Associated Press at the World Economic Forum, Morgan said Trump is “living on a different planet because he seems to think the well-being of Americans can continue without taking into account the planetary boundaries.”

She said that money, “which is clearly very important for him,” would not matter on a dead planet.

In his speech earlier Tuesday at the annual gathering of the elites in the Swiss ski resort of Davos, Trump dismissed as “doom-mongers” those predicting a potential “Armageddon” if the climate crisis isn’t addressed.

Trump spent much of his speech lauding the achievements of his three-year administration, notably its moves to slash regulations on businesses.

Morgan said it’s “quite clear” that Trump “has been working to do away with very important environmental regulations and laws that have been protecting the health of Americans for decades.”

“It’s great to be with the president of the European Commission and a woman who’s highly respected, I have to say, and I hear a very tough negotiator, which is bad news for us,” Trump told reporters before meeting her on the sidelines of the World Economic Forum in Davos, Switzerland. “Trade right now and a deal between ourselves and essentially Europe is something that we all want to be able to make.”

It was the first time that von der Leyen has met Trump, who has had many disagreements with Europe over tax and trade policy, including a new digital tax by the French that American tech giants, such as Amazon and Google, are forced to pay.

“I think what we never should forget that we have a long history of common foundation, of a lot of business compacts, friendship,” she said. “The American people and the European people are good friends and this is what we’ve got to build on.”

Trump has smarted over the French tax, and his administration has announced plans to impose retaliatory tariffs of up to 100% on cheese, wine, lipstick and other French imports. France has threatened to fight back. Trump has also sought to wring trade concessions from the EU by threatening tariffs on German autos, including BMW and Mercedes-Benz.

Chinese Vice-Premier Han Zheng launched a staunch defense of economic globalization and said it would not follow the “protectionist and unilateral” leads of other countries.

Without naming any country in particular, Han said China “will open its doors still wider to the world,” including allowing more sectors to have companies wholly owned by foreign businesses.

Economic globalization, he told an audience at the World Economic Forum, is a “trend of history” and “a strong driving force behind economic growth across the globe.”

His pitch of positioning China as a champion of globalization echoed the one made at the WEF three years ago by Chinese President Xi Jinping.

“Simply putting the blame on economic globalization is neither consistent with facts nor helpful in solving the probs,” he said, in an apparent dig at the U.S.

He said it was crucial that new ways of global cooperation are pursued, such as poverty reduction, climate change and environmental protection.

“International affairs must not be dictated by one country or a few countries,” he said.

The United States and China signed an initial trade deal last week, though many issues remain unresolved and the tariffs imposed by President Donald Trump over the past couple of years remain in place.

Proponents of trade and economics hailed a positive message that could sell on the U.S campaign trail, while defenders of the environment faulted Trump for missing a climate emergency.

Trump’s highly awaited address to the elite World Economic Forum was watched for any statements on climate change.

On his way in, Trump quipped he was a “big believer” in the environment, and during his address announced the U.S. would support a WEF-backed One Trillion Trees initiative. But nearly all of his speech was focused on economics.

Jennifer Morgan, the executive director of Greenpeace, said the focus on growth was “an anomaly in this climate emergency.”

“The habit of giving priority to (Gross Domestic Product) over the well-being of citizens has got to stop,”

Angel Gurria, head the Organization for Economic Cooperation and Development, praised a “very positive and constructive message” from Trump.

Croatian Prime Minister Andrej Plenkovic noted that Trump wanted above all to trumpet his administration’s achievements. “Without any doubt, this speech can be positioned well in the electoral year in the United States,” he said.

Rogoff said “he would have been booed if he said anything much about this and I think he was being very careful not to get booed.”

Rogoff also said some of Trump’s statements regarding the strength of the U.S. economy were true.

“What’s true is that the U.S economy has done well,” he said. “It wasn’t doing badly when he came in, that’s not true, but I think it’s done better than most of this group (those at the WEF) would have expected. It’s been a good 10 years and his 3 years probably better than expected.”

Climate activist Greta Thunberg doubled down on her criticism that world and business leaders aren’t taking the threat of global warming seriously.

She dismissed some of the measures bandied about by governments and companies, such as setting long-term targets for cutting greenhouse gas emissions and planting billions of new trees to capture carbon dioxide from the atmosphere.

She told a panel of the World Economic Forum in Davos, Switzerland: “Planting trees is good of course but it’s nowhere near enough.”

“It cannot replace mitigation,” she said, referring to efforts to drastically cut emissions in the near term.

Thunberg accused leaders of “cheating and fiddling around with numbers” by talking about cutting emissions to ‘net zero’ — emitting no more carbon than is absorbed by the planet or technical means — by 2050.

Responding to those who have accused her of doom-mongering, Thunberg said her message was simply based on scientific facts, not irrational fears.

“My generation will not give up without a fight,” she said.

In his speech, Trump had lauded a long list of achievements of his administration since it came to office three years ago. Stiglitz said right after the speech that “the characterization of the economy is totally wrong.”

Trump’s speech was met with almost total silence from the crowd, unlike his last speech in Davos in 2018, when he was met with occasional boos and laughter.

Stiglitz on Tuesday also voiced his frustration at Trump’s failure to address head on the climate emergency, beyond a commitment that the U.S. will join an initiative to plant a trillion trees worldwide. Climate change is a focal point of this year’s meeting in Davos of political and business leaders.

Pope Francis has a message for the high-powered participants at the economic forum in Davos, Switzerland: people, not profit, must be at the core of public policy.

Francis issued written greetings to remind delegates of the “moral obligation” to place “the human person, rather than the mere pursuit of power or profit, at the very center of public policy.”

He says the forum provides an arena where “political will and mutual cooperation can be guided and strengthened in overcoming the isolationism, individualism and ideological colonization that sadly characterizes too much contemporary debate.”

Francis is also encouraging the forum’s deliberations to boost solidarity with those suffering “social and economic injustice and whose very existence is even threatened.”

A Vatican cardinal is representing the pope at the gathering, which started Tuesday.

In an address to the World Economic Forum in Davos, Switzerland, Trump said America’s economic turnaround has been “nothing short of spectacular.”

He addressed a crowd of business and political leaders hours before his historic impeachment trial was set to reconvene in the U.S. Senate in Washington. His participation will his ability to balance his anger over being impeached with a desire to project leadership on the world stage.

The founder of Chinese tech giant Huawei has shrugged off U.S. pressure on his company.

Ren Zhengfei struck a casually defiant tone at the World Economic Forum in Davos, Switzerland when asked about the U.S. government’s blacklisting of Huawei.

He said Tuesday that being added to a U.S. list of sanctioned companies “didn’t hurt us much.”

President Donald Trump’s administration has been lobbying allies in Europe and elsewhere to block wireless carriers from using Huawei’s equipment in next-generation superfast mobile networks over concerns it could facilitate cyberespionage by the Chinese government. The company has denied the allegations.

Ren spoke just as Trump arrived in Davos to deliver a speech and meetings.

“This year the U.S. might further escalate their campaign against Huawei but I feel the impact on Huawei’s business would not be very significant,” Ren said, speaking through an interpreter.

Huawei has learned from its experiences and put in a stronger team, Ren said.

“We are more confident that we can survive even further attacks,” he said.