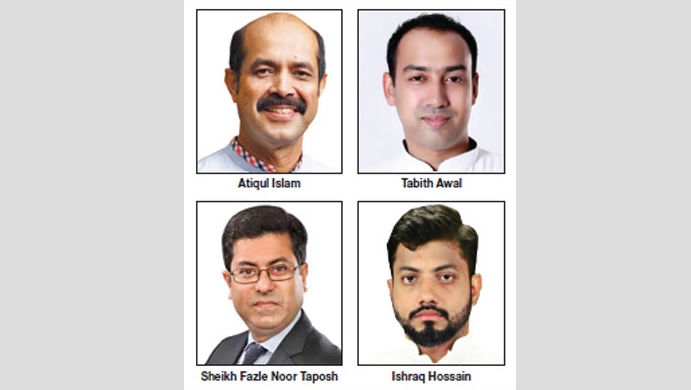 The eight-hour non-stop high-voltage elections to the two city corporations of Dhaka are set to be held today with a pledge by the Election Commission of ensuring a transparent and neutral voting under a security clampdown.
The entire polls will be held for the first time under the Electronic Voting Machine (EVMs) despite a strong opposition by the opposition Bangladesh Nationalist Party (BNP), but rubbished by the Commission as baseless fears.

The brisk all-out campaign to take hold of the city has turn into an high-voltage democratic exercise.The voting festivity will start at 8:00am and will continue till 4:00pm without any break while the two top political parties — the ruling Awami League and opposition BNP — seem desperate to win the polls of Dhaka North (DNCC) and Dhaka South City Corporations (DSCC) to establish supremacy in the capital city – the heart of administration and politics.

On the eve of the polls, Chief Election Commissioner KM Nurul Huda appealed to the voters to come to the polling booths and cast their vote for their chosen candidates.

He hoped that members of the law enforcement agencies would discharge their responsibilities in a neutral manner.

“Electronic Voting Machine is such a system where the voters have to go to cast votes. There is no way to cast fake votes,” he said.

Some 54, 63,467 voters are also ready to elect the new city mayors, councilors and reserved seat councilors under the EVM system.

Some 750 candidates are contesting for the mayors, councilors and reserved seat councilor posts in the two city corporations.

The CEC said the Election Commission has been working impartially for holding the polls peacefully.

“The confidence of political parties on the Election Commission depends on their attitude. We have not held partial election….and will not do so,” he said.

“We have never seen that the political parties have confidence on the Election Commission. So, the statement of ruling party and the opposition are not same. It is our political culture that the opposition parties have not showed confidence on the Election Commission,” he said while visiting the venue of Dhaka Residential Model School and College.

Returning officers of both Dhaka north and south city corporations distributed polls materials on Friday amid a tight security.

Members of Police, APBN, RAB, BGB, Ansar & VDP and coast guard have been deployed since January 30 and will remain vigil in voting areas till February 2.

A total 5,015 army personnel will be deployed for providing technical support for the EVMS.

Two sergeants or corporals or lance-corporals or soldiers will be deployed in each polling center.

The election commission imposed a ban over fire arms in the electoral area from 6:00am between January 30 and 12:00 am on February 3.

It also imposed a 54-hour ban on the movement of motorcycles in the capital ahead of the city election from Thursday midnight until Sunday morning.

Movements of other vehicles have also been restricted for 18 hours but it will come into effect from Friday midnight in the election areas.

Operating of baby-taxi or auto-rickshaw, taxicab, microbus, jeep, pickup, car, bus, truck and other motor-driven vehicles will be restricted from January 31 midnight (12am) to February 1 evening (6pm).

Motorcycles and vehicles with EC’s stickers, vehicles of emergency services, including ambulance, fire service and postal department, will remain out of the ban’s purview.

A total 43 executive magistrate 18 for DNCC and 25 for DSCC have been deploying during election campaign will be deployed for election duty from January 30 to February 2.

Without this 129 executive magistrate 54 for DNCC and 75 for DSCC have been deployed with mobile striking force.

The Election Commission has formed a central monitoring and coordination cell to monitor the law and order situation during the election.

The cell will monitor the overall security during the election and informed it to the commission, said a source of the EC.