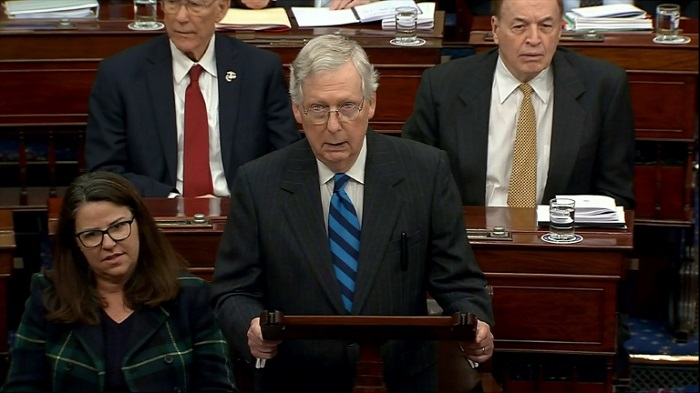 The US Senate could acquit Donald Trump of impeachment charges as early as Friday after Democratic efforts to call trial witnesses appeared to fall short, handing the president a decisive political victory heading into a tough re-election fight.
Democrats have four more hours of debate to try and convince Republicans to agree to subpoena former White House national security advisor John Bolton, who would likely testify in support of the abuse-of-power charge against the US leader.

But after a key Republican senator, Lamar Alexander, announced late Thursday that he would oppose witnesses, Democratic prosecutors from the House appeared lacking support to overcome the 53-47 Republican majority in the Senate.With Friday’s hearing opening at 1 pm (1800 GMT) a vote on witnesses could come by early evening.

Senate Majority Leader Mitch McConnell, a key Trump ally, could then call for quick votes on the two charges against Trump — abuse of power and obstruction of congress — with the president’s acquittal all but guaranteed, given the two-thirds super-majority required to convict him.

Only the third US president to be impeached and stand trial, Trump is accused of illicitly pressuring Ukraine — including by holding up some $391 million in defense aid — to investigate rival Democrats including his possible 2020 challenger Joe Biden.

Impeached by the Democratic-majority House of Representatives on December 18, he is also accused of obstructing the Congressional probe into the scheme by blocking subpoenaed witnesses and documents.

On the pivotal issue of calling witnesses to appear in the Senate — which could extend the trial another two weeks or more — Senator Susan Collins has announced she would support the move, and fellow Republican Mitt Romney has also said he is in favor.

A third Republican, Lisa Murkowski, remained on the fence early Friday, but even if she does support witnesses, that would leave Democrats with 50 votes, one shy of the majority they need.There is the possibility that Supreme Court Chief Justice John Roberts, who is presiding over the trial, could be called upon to break a 50-50 deadlock.

But if as expected he declines to vote, the motion calling for witnesses would fail.

Senator Alexander’s decision, which came at the end of six marathon days of arguments by the House prosecutors and Trump’s defense, and two more 10-hour question-and-answer sessions before the 100 senators sitting as jurors, appeared to be a key turning point.

The 79-year-old senator from Tennessee, who plans to retire this year, said Trump’s actions had been “inappropriate,” but he did not see the president’s wrongdoing as serious enough to merit impeachment and removal from office.

“There is no need for more evidence” to prove the charges, Alexander said.

“It was inappropriate for the president to ask a foreign leader to investigate his political opponent and to withhold United States aid to encourage that investigation,” he said.

“But the Constitution does not give the Senate the power to remove the president from office and ban him from this year’s ballot simply for actions that are inappropriate.”

“I believe that the Constitution provides that the people should make that decision in the presidential election that begins in Iowa on Monday.”

Democrats said refusing to call witnesses to the trial — they have been seeking Bolton and three senior White House aides, including Trump’s chief of staff Mick Mulvaney — was tantamount to a cover-up.

“We know John Bolton is available and willing to testify. The Senate should call him forward,” said Democratic Senator Kamala Harris.

“If we don’t see a single witness in Trump’s impeachment trial, this is a miscarriage of justice.”

Chief Democratic prosecutor Adam Schiff, in a last-ditch bid on Thursday to win over Republican senators wary of a drawn-out process, had proposed a one-week time frame to secure new witness testimony.

“Let’s have a reasonable accommodation here,” Schiff said. “We’ll take one week, and you’ll continue with the business of the Senate.”

“They said for weeks it was an overwhelming case,” said White House deputy counsel Patrick Philbin. “If that’s their position, why do they need more witnesses?”

White House counsel Pat Cipollone argued for an early acquittal, saying it “would be the best thing for our country.”