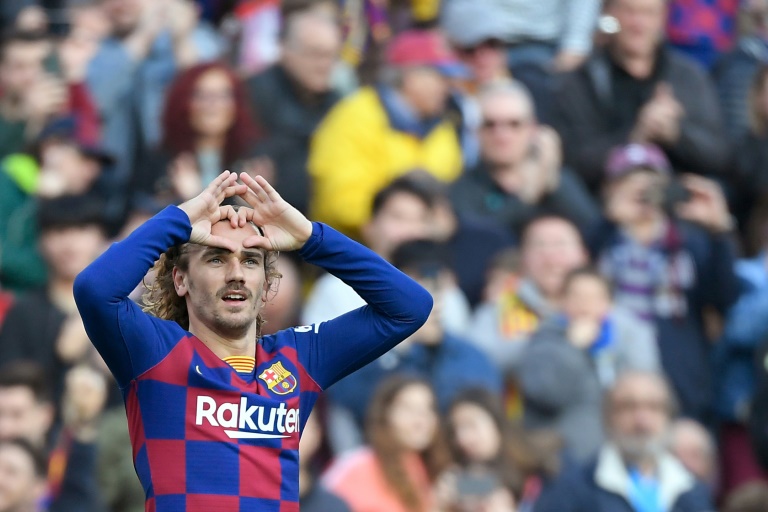 A slick Antoine Griezmann strike set Barcelona on their way against Getafe in La Liga on Saturday before they survived a late onslaught from the gritty visitors to win 2-1.
The result leaves Barcelona trailing on goal-difference atop La Liga before leaders Real Madrid’s Sunday home game with Celta Vigo.

In a physically engaging game, Barca star Jordi Alba limped off in the first half.Alba, the club tweeted after the game, “is suffering from a right adductor muscle injury and will be undergoing further tests.”

The Catalan giants have a Champions League last-16 game away to Napoli on Tuesday.

Barcelona forwards Luis Suarez and Ousmane Dembele are both out with long-term injuries.

Fed by a masterful through ball from Lionel Messi, Griezmann’s finish was perfect as he clipped the ball over onrushing goalkeeper David Soria on 33 minutes.

Sergi Roberto then doubled the scores six minutes later, firing into the bottom corner from a cross by Alba’s replacement Junior Firpo.

But a late rally from Getafe, third in La Liga after four straight wins without conceding a goal, gave Barca a scare.Getafe, playing in their dayglo yellow away strip, often silenced the 80,409 fans at the Camp Nou.

Their direct approach yielded a goal when Angel Rodriguez scored with a powerful volley on 66 minutes.

Rodriguez came within an inch of pulling Getafe level on 73 minutes sparking a goalmouth scramble. Goalkeeper Marc-Andre ter Stegen scooped the ball off the line.

Barcelona clung on before Griezmann and Messi both went close with late efforts.

Allan Nyom thought he had put Getafe ahead on 25 minutes when he banged home a rebound. A VAR review, however, judged he had fouled Samuel Umtiti.

Mallorca climbed out of the relegations places as Cucho Hernandez scored the goal in a 1-0 home victory over Alaves.

Real Sociedad’s visit to Eibar on Sunday has been called off because of poor air quality following a landslide into a nearby rubbish dump, the clubs announced on Saturday.

The Basque regional health department had recommended that sports be avoided in the area after the rockslide on February 6 into the Zaldibar rubbish dump, about eight kilometres from Eibar’s Ipurua stadium.