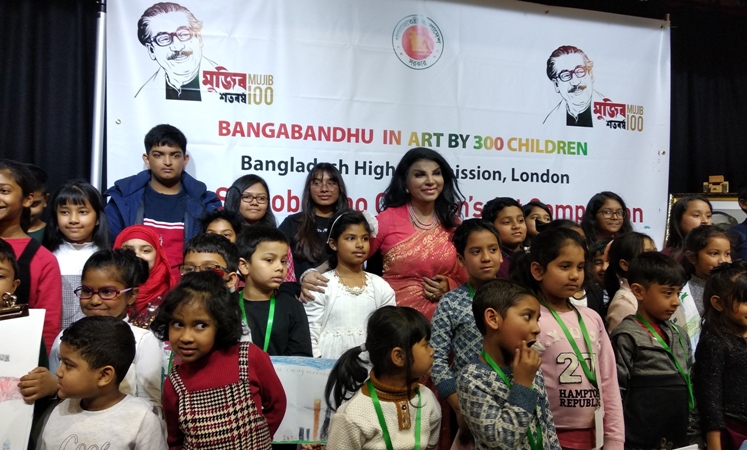 Bangladesh High Commission in London on Sunday organised a “Mujib Shotoborsho Children’s Art Competition” to celebrate the historic birth centenary of the Father of the Nation Bangabandhu Sheikh Mujibur Rahman.
It was an extraordinary, colourful and the largest-ever art fest of Bangladeshi-British children of 5 years to 18 years old.

“We have paid our highest tribute to the Father of the Nation through the art and paintings of nearly 500 children on themes such as Bangabandhu’s Golden Bengal. We are thankful to Prime Minister Sheikh Hasina and the National Implementation Committee for celebrating Mujib Borsho for supporting us”, High Commissioner for Bangladesh to the United Kingdom and Ireland Saida Muna Tasneem told journalists while speaking on this children’s art event at the Brady Art Centre in East London.The High Commissioner said that the idea of this competition was to make Bangladeshi-British children more aware of Bangabandhu’s charismatic political career and his quest for Bangladesh’s independence, said the Bangladesh High Commission in London.

She said this is also a part of the year-long programmes that the High Commission in London has chalked out to celebrate the Mujib Borsho in the UK and Ireland.

A similar competition is being organised by the High Commission in major cities in the UK and Ireland including Greater London, Manchester, Birmingham, Dublin and Cardiff.

A panel of five renowned artists and art critics including Mohammad Asad, Mukta Chowdhury and Kamrul Ahsan will judge the art and paintings of the competition. On completion of the competition in other cities and towns, participating children will be awarded at the “Bangabandhu Centenary Children’s Festival” to be held in London in March 2020.