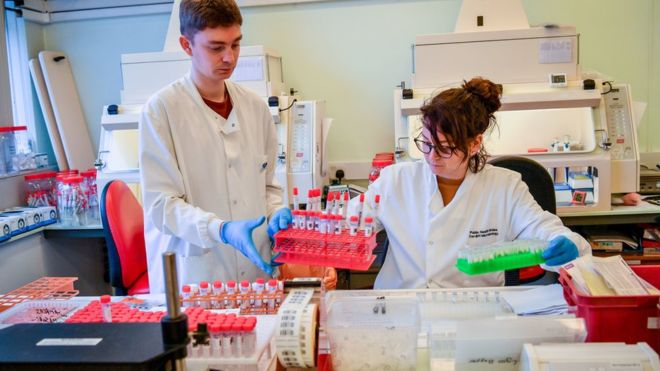 Frontline hospital staff in England are starting to be tested to see whether they have coronavirus.

Workers with symptoms and those who live with people who have symptoms will be checked – starting with hundreds of critical care doctors and nurses.

Tests for A&E staff, paramedics and GPs are expected to follow, and later social care staff will be tested.

It comes as the number of people who have died with the virus in the UK rose by 260 to 1,019 on Saturday.

Latest government fingers show there are now 17,089 confirmed cases in the UK.

In Wales, Scotland and Northern Ireland, health workers are already being tested.

Until now, only patients in English hospitals with flu-like symptoms were being routinely tested but this had led to concerns that without testing, many health and care workers would not know whether they were safe to return to work.

Meanwhile, Scottish Secretary Alister Jack is the latest politician to announce he is self-isolating after showing mild symptoms.

Mr Jack spoke in the Commons on Wednesday,  sitting near to the PM and Mr Hancock,   although they appeared to follow social distancing rules with spaces between them on the benches.

“They do need to learn a lesson from this,” he told BBC Radio 4’s Today Programme when asked about pictures from the House of Commons earlier this week which showed several members of the cabinet crowded near the Speaker’s chair.

The Mayor of Greater Manchester and former Health Secretary Andy Burnham expressed concern about the safety of politicians, saying it was “very hard” for people working in Westminster to maintain safe distances.