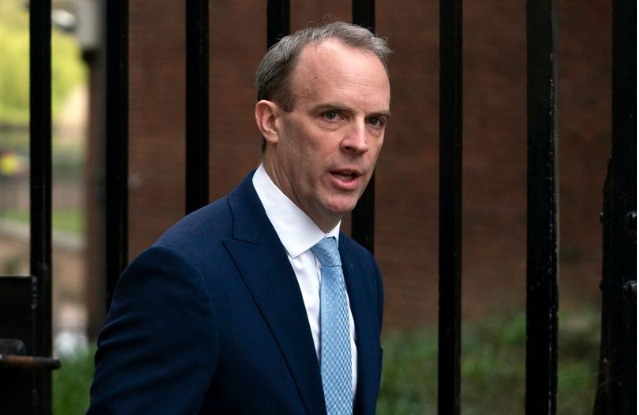 UK Foreign Secretary Dominic Raab is in charge of the UK’s nuclear deterrent, Downing Street has cofirmed.
Mr Raab, who last night was deputised by the Prime Minister when he was rushed to hospital, has the “authority to respond” in Mr Johnson’s absence they said.

While Mr Raab will take on a number of key authorities for the PM – he will also chair the UK’s national security council if needed – he will not have the power to hire or fire ministers.Normally only the prime minister can authorise a nuclear strike.

Such an order would be transmitted to one of Britain’s nuclear submarines with a special set of codes.

The decisions of what to do in event of the government being destroyed are written in a series of ‘last resort’ letters.

While Mr Raab would be able in league with the NSC and Cabinet to make any decisions, he cannot rewrite the letters of last resort written by Mr Johnson.

The PM’s official spokesman said: “In relation to national security matters the First SoS and the Cabinet have the authority and ability to respond in the PM’s absence.

“The UK has robust national security architecture, including the NSC, which is designed to be resilient and able to operate effectively under different circumstances.”He added: “Should any NSC be required the Foreign Secretary would chair it.

“In relation to nationa; security decisions are taken by the Cabinet. The Foreign secretary would chair any Cabinet meeting.”

Number 10 say Mr Raab has not been asked to write letters of his own, because “the Prime Minister remains the Prime Minister.”
The United Kingdom is one of the world’s five official nuclear weapon states and has four nuclear submarines armed with Trident II D5 ballistic missiles loaded with nuclear warheads.

The UK also has a stockpile of about 215 nuclear warheads, though about 120 are operationally available.

Officals also confirmed that Mr Johnson has not been diagnosed with pneumonia and is not on a ventilator, despite being in intensive care with coronavirus, his spokesman said today.

The Prime Minister’s official spokesman insisted he was in “good spirits” some 17 hours after he was taken to the critical unit at St Thomas’ Hospital.
The spokesman said Mr Johnson was moved to the intensive care unit “as a precautionary step in the event that he were to need ventilation”.

The spokesman refused to say if Mr Johnson gave his order for Mr Raab to take over directly.

Instead the spokesman said: “He conveyed the message that he wanted the Foreign Secretary to assume the responsibilities where appropriate.”