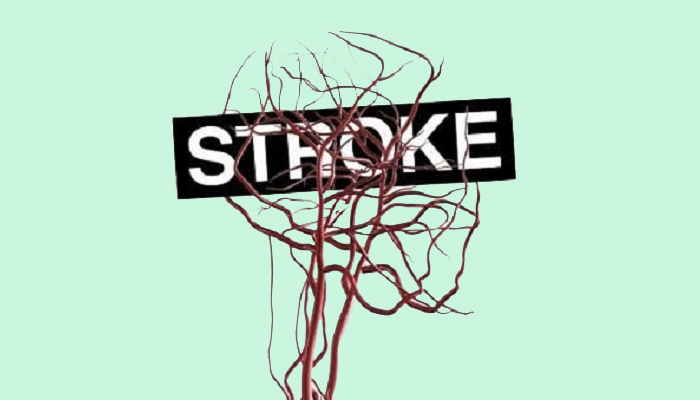 Stroke is a medical condition in which poor blood flow to the brain results in cell death.
There are two main types of stroke: ischemic, due to lack of blood flow, and hemorrhagic, due to bleeding.

They result in part of the brain not functioning properly. Signs and symptoms of a stroke may include an inability to move or feel on one side of the body, problems understanding or speaking, feeling like the world is spinning, or loss of vision to one side. Signs and symptoms often appear soon after the stroke has occurred.The main risk factor for stroke is high blood pressure. Other risk factors include tobacco smoking, obesity, high blood cholesterol, diabetes mellitus, previous TIA, and atrial fibrillation. Prevention includes decreasing risk factors, as well as possibly aspirin, statins, surgery to open up the arteries to the brain in those with problematic narrowing, and warfarin in those with atrial fibrillation.

Why do strokes often happen in the bathroom?

Why some people develop heart attacks or strokes (brain attack) while taking a bath? Is it just coincidental or is there something in the bathing process that could trigger these potentially serious complications? Is there a proper sequence of bathing, like wetting the limbs or feet first, followed by the body, then the head? Can a cold shower trigger a stroke or heart attack?

These are very interesting and important questions.

Wetting the head and hair first when showering causes the body to adjust its temperature too quickly because we are warm blooded. By performing this incorrect sequence, blood rushing up the head may cause capillary or artery breakage hence a stroke and a fall. Right way of showering is to start wetting the body from the feet up to the shoulders slowly. A sensation of vapour coming out of the crown on the head or bristling of body hair may be felt for some people. Follow this procedure then shower as usual. Especially, useful for people with high blood, high cholesterol and even migraine. This is also linked to circadian rhythm. Blood pressure is high in the morning. And most people have a shower in the morning and hence the correlation.Not the bathing

In many instances, it’s not the bathing but the straining during bowel movement which can trigger a stroke or heart attack in the bathroom. Also patients develop a heart attack or stroke while exerting effort in the toilet, rather than taking a bath.

When one strains, when one is constipated, for instance, one holds down one’s breath and bears down excessively—which is called a Valsalva maneuver. This increases the abdominal pressure and helps force out the stools. But this action is also very stressful to the heart and the circulatory system, as it increases the pressure inside the chest, thus reducing the blood flow to the heart. The pumping of the heart slows down, and the amount of blood being pumped up to nourish the brain decreases. Some faint (syncope) as a result. To make matters worse, the sudden release of the straining motion abruptly increases the blood pressure, and in those with uncontrolled blood pressures, it might cause some arteries in the brain to burst (intracerebral hemorrhage due to sudden increase in blood pressure). So, excessive straining while moving one’s bowels is a relatively more common trigger of heart attack or stroke in individuals at risk, than the bathing process itself. That’s why chronic constipation has been linked to a higher risk of cardiovascular events (heart attack, stroke, sudden cardiac death).

Slipping in the bathroom

Some elderly and frail individuals slip in the bathroom. When they hit their heads, they suffer bleeding in the brain (subdural hemorrhage). Therefore, one must take precaution—use bath bench or stool, don’t remain standing. Have grab bars installed on the bathroom walls. Spread out bath mats with suction cups to cover slippery surfaces.

Chilling can cause the arteries to constrict and prevent blood flow to vital organs like the heart and brain. So, it’s best to avoid chilling at all times. When planning to take a bath but hesitant to get wet with cold water ( if there’s no heater), turn on the shower but avoid getting wet in the first few seconds. It’s the same when using a dipper, pour the first scoop just beside the body. This gives ample time to muster enough courage whether to go on with cold bathing or not.