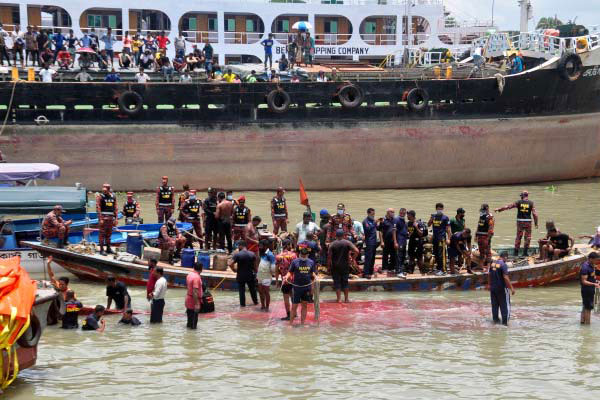 Rescue workers recovered the body of a child from Buriganga on Tuesday noon, a day after a launch capsized in the river near Shyambazar of old Dhaka.

The identity of the deceased could not be known yet.
With this, the death toll from the boat accident stood at 33.

However, the rescue operations are continuing for the second day after a fatal collision between two launches on Dhaka’s Buriganga River killed 32 people on Monday.

The divers resumed their search at 9:30 am on Tuesday after taking an hour-long break following an overnight search on Monday, Kamrul Hasan, a duty officer in the Fire Service Control Room, said.

Morning Bird, with over 50 passengers on board, left Munshiganj’s Kathpotti for the capital about 7:30 am on Monday and reached near Shyambazar just after 9 am.

Moyur-2, a larger vessel from Chandpur, which was speeding in reverse, slammed Morning Bird. In the next few seconds, Morning Bird went upside down and sank.

The sunken launch has been brought near the shore in the morning through BIWTA-led efforts. A small rescue ship, Duranta, has been brought in for assistance.
Naval police filed a case over the launch capsize in the river Buriganga on Tuesday, bringing charges of “negligent death” against seven people.

The government formed a seven-strong panel, headed by a joint secretary to the shipping ministry, to look into the incident.