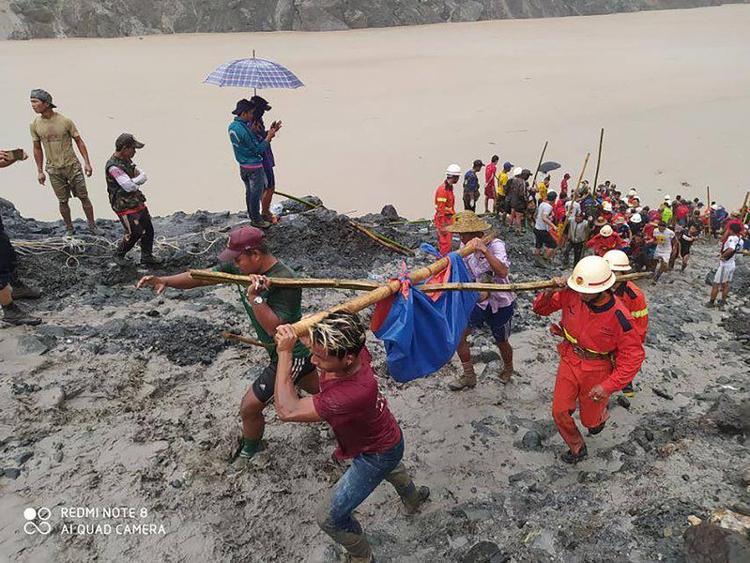 At least 162 bodies have been found after a landslide at a jade mining site in northern Myanmar, officials say.

Rescue work has continued all day for people still missing at the site in the Hpakant area of Kachin state.

A wave of mud and rock triggered by heavy rain engulfed those collecting stones, the fire service said.

Myanmar is the world’s biggest source of jade but its mines have seen numerous accidents, many involving people who scavenge for stones.

The country’s fire service department said in a Facebook post (in Burmese): “The jade miners were smothered by a wave of mud, which hit after heavy rainfall.”

Heavy rain continued all day during the rescue work.

Police said some people had defied a warning issued on Wednesday not to work in the area after the rainfall, although the advice may also have saved many lives.
Video of the incident shows a massive landslide pouring into a large flooded pit or lake.

Maung Khaing, a 38-year-old miner, told Reuters he saw a towering pile of waste close to collapse and people were shouting “run, run”.

He said: “Within a minute, all the people at the bottom [of the hill] just disappeared. I feel empty in my heart… There were people stuck in the mud shouting for help but no-one could help them.”

Hundreds of people gather at mines to sift through rubble discarded from lorries, hoping to find jade stones.
The rubble creates large slopes that can be dangerous in an area denuded of trees and resembling a moonscape.

Myanmar’s jade trade is reported to be worth more than $30bn (£24bn) a year. Hpakant is the site of the world’s biggest jade mine.

The BBC’s Jonathan Head in Bangkok says a new gemstone mining law was passed last year, but critics say the government has too few inspectors with only limited authority to stop illegal practices.

He says campaigners have accused the military, drug dealers, insurgent groups and Chinese business interests of controlling the jade trade and preventing a safer and more sustainable exploitation of the valuable gemstone.