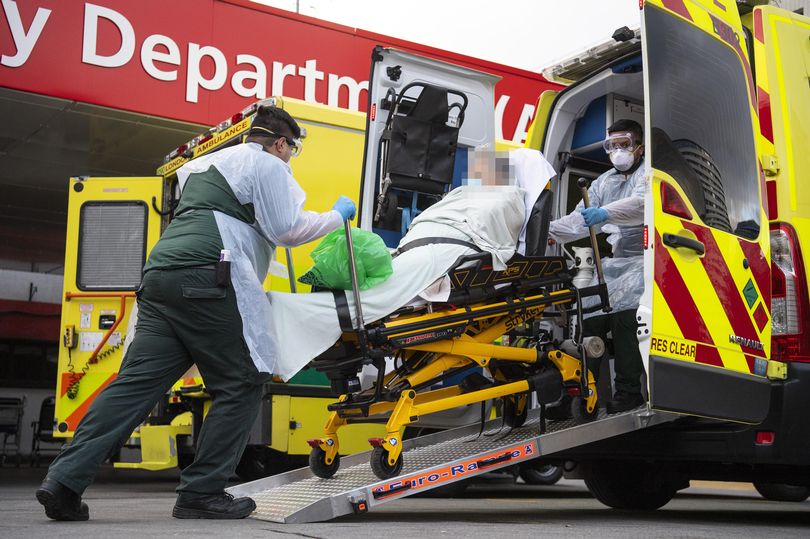 British officials have confirmed another 45 coronavirus deaths today in the preliminary toll, taking the nation’s official number of victims to 43,951.

The count, which only includes a fraction of the fatalities in England, was announced by adding up the updates by NHS England, Public Health Wales and the Scottish and Northern Irish governments.

A full UK-wide roundup will be published later this afternoon by the Department of Health, which is often much higher because it takes into account laboratory-confirmed deaths in every setting.

NHS England said another 35 people died in its hospitals between April 2 and July 1. Another eight deaths were confirmed in Wales today, along with one each in Scotland and Northern Ireland.

Today’s data comes after 176 more deaths were confirmed yesterday. In comparison, 149 lab-confirmed fatalities were recorded last Thursday, as well as 137 the week before.

Deaths in the UK are continuing to trend downwards and the seven-day average yesterday was 118.

This was a higher weekly average than for any other day since Saturday, but still lower than March 27 and June 23.

Department of Health figures released yesterday showed 226,398 tests were carried out or posted the day before. The number includes antibody tests for frontline NHS and care workers.

But bosses again refused to say how many people were tested, meaning the exact number of Brits who have been swabbed for the SARS-CoV-2 virus has been a mystery for a month — since May 22.

Health chiefs also reported 829 more cases of Covid-19. Government statistics show the official size of the UK’s  outbreak now stands at 313,483 cases. But the actual size of the outbreak is estimated to be in the millions, based on antibody testing data. 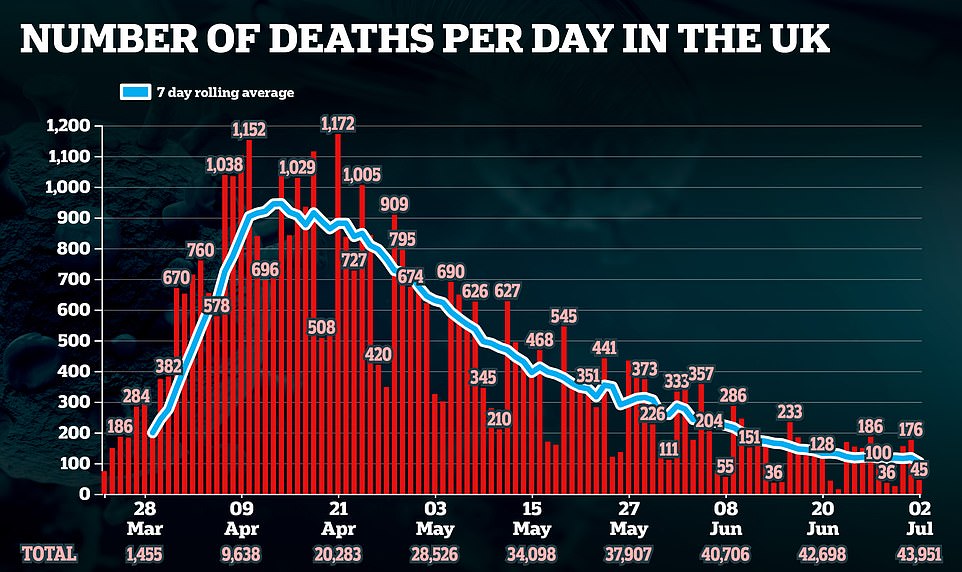 The daily death data does not represent how many Covid-19 patients died within the last 24 hours — it is only how many fatalities have been reported and registered with the authorities.

The data does not always match updates provided by the home nations. Department of Health officials work off a different time cut-off, meaning daily updates from Scotland as well as Northern Ireland are always out of sync.

And the count announced by NHS England every afternoon — which only takes into account deaths in hospitals — does not match up with the DH figures because they work off a different recording system.

For instance, some deaths announced by NHS England bosses will have already been counted by the Department of Health, which records fatalities ‘as soon as they are available’.

Separate data published today by the Department of Health showed that NHS Test and Trace is still failing to find a quarter of patients who test positive for coronavirus.

A total of 1,383 people with the disease were not reached and so did not provide information about close contacts for tracers to follow up and isolate.

An additional 161 people who tested positive could not be reached at all by the tracers – who phone, text and email someone 10 times a day to get hold of them.

Scientists have warned contact tracing programmes need to catch at least 80 per cent of infections to keep the epidemic squashed.

The Department of Health report also showed that, of the 4,639 patients who were tracked down, one in four did not hand over a single close contact.

Some of these people would have outright refused to provide information about their friends and family.

But others were unable to give details because they had only come into contact with complete strangers, such as on the bus.

Today’s report also revealed that fewer than one in 10 of people who take a coronavirus test at home get results within 24 hours.

That was despite Boris Johnson’s promise to turn around every coronavirus test within a single day by the end of the month.

It was also revealed today that only eight of England’s 50 areas worst-hit by coronavirus are in the South, according to official data that lays bare the country’s North-South divide amid the growing threat of more ‘local lockdowns’.

Leicester — the first city in UK to be struck by further Covid-controlling measures — has the worst infection rate in the country, with 140.2 cases confirmed between June 15-21 for every 100,000 people. It is followed by a cluster in the North West of England, with Bradford, Barnsley and Rochdale all recording at least 50 coronavirus infections for every 100,000 people in the same seven-day spell.

Analysis of the Public Health England data shows they aren’t the only places in the North to be rocked by flare-ups of the disease, which has claimed at least 55,000 lives across the whole of the UK.

In comparison, just six authorities at the bottom of the table are in the North or the Midlands — South Tyneside (0), Redcar and Cleveland (0.7), Sunderland (1.8), North East Lincolnshire (1.9), Rutland (2.5) and Northumberland.

One of the main causes of the ‘North-South’ divide in coronavirus cases in England is down to the disparity in job roles, experts believe — pointing to figures showing London is recovering quicker than most regions.

Scientists say infections may have dropped at a faster rate in the capital because there are more white collar jobs there, therefore more employees were able to work from home and isolate from others. In deprived areas people are more likely to have to go to work and use public transport — raising their risk of being infected.

Government sources say Leicester-style shutdowns could be ‘just days away’ for other places ahead of the biggest step back to normal life with Brits set to flock to the pubs to celebrate ‘Super Saturday’.