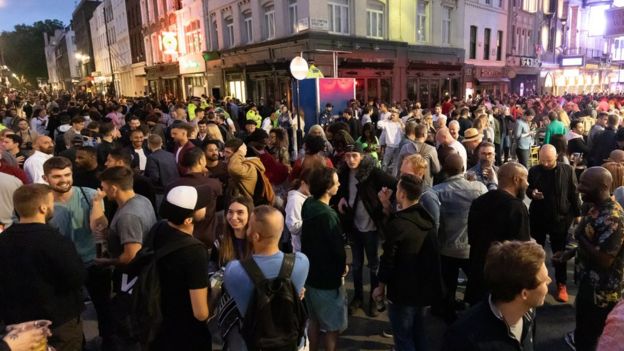 Some streets in Soho, London, were closed to traffic

It is “crystal clear” that drunk people are unable to socially distance, the chair of the Police Federation said as pubs reopened on Saturday.

Ministers had urged caution ahead of hospitality venues reopening in England after three months of lockdown.

But police thanked the majority of people for acting responsibly as they enjoyed the night out.

Streets were packed in London’s Soho district, with images showing revellers outside pubs into the early hours of Sunday. 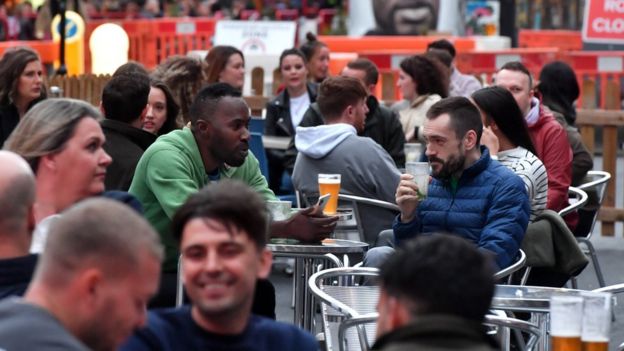 The Metropolitan Police said “a small number” of premises closed early following advice from officers due to crowding, but the force added that there were “no significant issues” in the capital.

Devon and Cornwall Police received more than 1,000 reports, most of which were “drink-related”.

While people were out in droves at thousands of venues, fears emergency services could be as busy as New Year’s Eve appear not to have been realised. 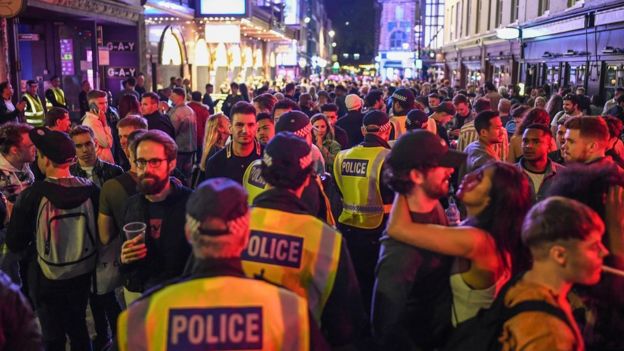 Police officers were seen walking through heavy crowds in Soho

But Mr Apter, from the Police Federation, an association for police staff in England and Wales, said: “What was crystal clear is that drunk people can’t/won’t socially distance.

“It was a busy night but the shift managed to cope. I know other areas have had issues with officers being assaulted.”

He told ‘ Sophy Ridge: “Overall I’m pleased with what happened yesterday, it was really good to see people out and about and very largely social distancing.” 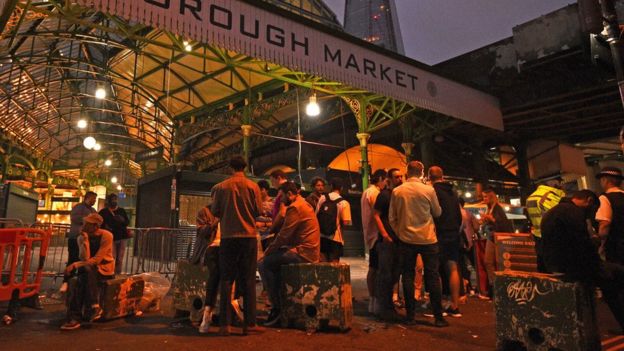 Sir Simon Stevens, NHS England chief executive, told the BBC’s Andrew Marr Show: “Pleasingly, we did not see last night the kind of scenes that people feared might be. It was the foolish few, but the sensible majority.”

Rob Moore, paramedic at the West Midlands Ambulance Service, told BBC Breakfast it had been a “really average” night shift in his area.

“We were really prepared for a sudden upsurge in calls related to people being out drinking but it hasn’t happened thankfully,” he said. “Hopefully it’s a sign people have heeded the advice and had a sensible night.” 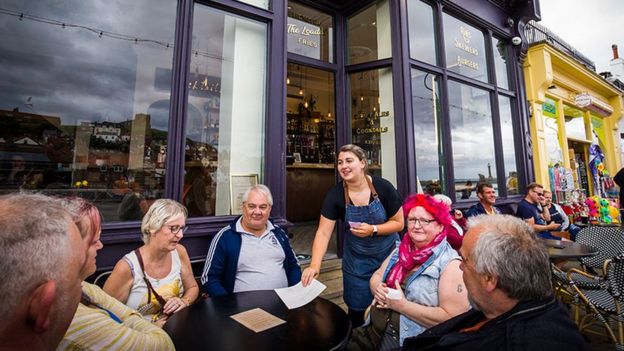 A group sits outside a bar and restaurant in Whitby, after travelling from nearby Darlington

People in England are still urged to stay 2m apart, but the new ” one metre plus” guidance means they can get closer if they use “mitigation” measures, such as face coverings and not sitting face-to-face.

Boris Johnson and government experts had urged people to stick to the rules to avoid creating a second wave of coronavirus, with chief medical officer for England Chris Whitty saying easing lockdown is not ” risk-free”.

The latest figures, released on Saturday, showed a further 67 people had died in the UK after testing positive for coronavirus, bringing the death toll to 44,198.

There were long queues outside a barbers in Clapham, south London

Dr Chris Smith, a virologist from the University of Cambridge, said that the majority of people are “responsible”, but urged caution, citing cities such as Leicester and Melbourne, which have imposed localised lockdowns.

“I would remind people, have a look at what’s going on around the world,” Dr Smith told BBC Breakfast.

“We could easily lurch back in the wrong direction if we don’t remain vigilant because this thing hasn’t gone away. We’ve still got a lot of circulation of the virus in the country, it’s just a lot lower than when we started.”

In Leicester, streets were largely deserted as pubs and other venues remain closed after the city became the first to be subject to a local lockdown on Monday, following a spike in Covid-19 cases.

Restrictions on the hospitality sector remain in place in Scotland and Wales, while pubs have been able to open in Northern Ireland since Friday.