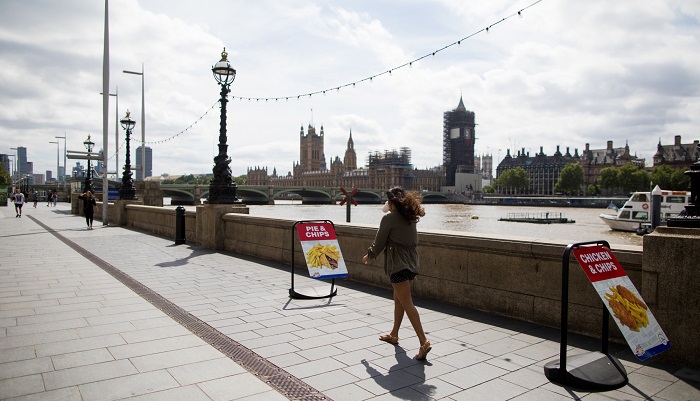 The UK will plow 800 million pounds ($1 billion) into job centers in an effort to cope with a surge in unemployment in the wake of the coronavirus pandemic.

The government will double the number of work coaches to 27,000 to help benefit claimants back into work, with an initial 4,500 hires by October, the Treasury said late Saturday in an emailed statement.

“The additional army of work coaches will give job-seekers bespoke, personalized support to build skills, improve their employment prospects, and find local jobs that are right for them,” the Treasury said.

The announcement comes as Chancellor of the Exchequer Rishi Sunak prepares to give a statement on Wednesday outlining measures to help stimulate the economy and protect jobs as the country emerges from a national lockdown that began March 23. On Saturday, pubs were allowed to reopen, after non-essential shops were permitted to do so last month.

Sunak is focusing on protecting jobs — particularly for young workers who held more precarious roles before the pandemic and now face a struggle to find new work. He’ll put forward a wider stimulus package in a budget in the fall, when the effects of the lockdown and the unwinding of his furlough program to protect private-sector jobs will be more in evidence.

“What you’ll hear from the chancellor is a package focused on jobs, jobs, jobs, so that we can get the economic recovery from this virus as fast as we can,” Health Secretary Matt Hancock told Sky News on Sunday.

With officials downplaying expectations about his statement, Sunak is coming under pressure from business groups to ensure he doesn’t just do the bare minimum to revive the economy.

“I would very much urge them to be bold and try to get ahead of some of the problems that are coming in the autumn rather than adopt a watch-and-wait approach,” British Chambers of Commerce Director General Adam Marshall said in an interview on Friday. The necessary support “is going to cost a lot of money and be difficult in a number of ways, but it’s also incredibly important because if they want to avoid significant unemployment and if they want to inject some confidence into both business and consumers, the time to do it is now.”

Marshall called for wage subsidies for apprentices, a fund to support jobs for young people and a cut to national insurance payments made by employers. He also suggested the government could issue vouchers for households to spend on retail high streets to get the economy moving again. The Observer on Sunday reported that Sunak is considering Resolution Foundation proposals to issue 500-pound vouchers for all adults and 250-pound vouchers for children to spend in the sectors of the economy worst-hit by the virus.

The chancellor’s emergency measures during the pandemic mean the government is now supporting the wages of almost 12 million private-sector workers under programs for furloughed staff and the self-employed.

Despite that, jobless claims have already doubled to almost 3 million, as the economy plunges into what may be its worst recession in three centuries.

Under the furlough plan, the government is paying 80% of the wages for 9.3 million jobs at a cost of 25.5 billion pounds. That support will decrease starting next month as companies are forced to shoulder more of the cost.

On Sunday, the opposition Labour Party’s finance spokeswoman, Anneliese Dodds, called on Sunak to abandon what she called his “one-size-fits-all” approach.

“Let’s have an approach which reflects the fact that this is an economic crisis which is affecting sectors differently,” Dodds told Sky News. “Different sectors really need that strong support now. If we put it in place then we won’t see the kind of mass unemployment that is threatening our country currently.”

The toll is already beginning to show with companies including Airbus SE, Swissport International AG, shirtmaker TM Lewin and the London department store Harrods announcing thousands of job cuts among them. On Friday, the manufacturing industry group Make UK said that 42% of firms plan job cuts in the next six months, with another 31% saying redundancies are possible.

On Sunday, the Trades Union Congress and the leaders of the country’s four biggest labor unions issued a statement to the chancellor warning of “mass unemployment on a scale not seen since the 1980s.”

“We have a very short window to save hundreds of thousands of jobs,” the union chiefs wrote. They urged Sunak to “extend the job retention scheme beyond October for businesses who have a viable future but need longer to build back,” invest in green infrastructure and guarantee a job for every young person.

As well as the job center funding, the Treasury on Sunday announced a 17 million-pound package to provide more than 30,000 new placements in work academies, designed to provide training to those on benefits in skills needed for local jobs. That will triple the number of placements in the next eight months, the Treasury said.

By investing in job centers, Sunak is tapping a measure used by Gordon Brown’s government in the 2008-2009 recession, when another 10,000 staff were recruited. To coordinate efforts to protect jobs, officials at the Treasury and the Department for Work and Pensions have formed a unit reporting to Sunak and Work and Pensions Secretary Therese Coffey, according to the statement.