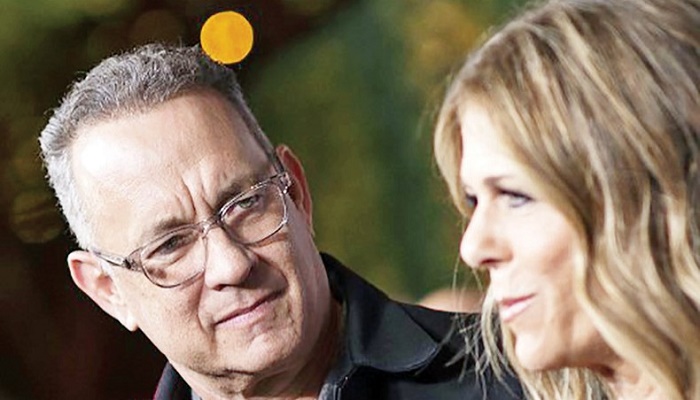 Tom Hanks is “heartbroken” that his World War II thriller must skip the big screen due to the pandemic — but hopes it can still teach audiences at home a thing or two about acting decently in a global crisis.

“Greyhound,” out on Apple TV+ Friday, was written by and stars Hanks as a rookie captain escorting a convoy of Allied ships as they cross the freezing North Atlantic, hounded by Nazi U-boats.
The movie follows a destroyer’s terrified young crew crossing the treacherous ocean beyond the range of air cover, bound together in life-and-death responsibility for protecting the fleet and each other.

“Those guys on the ship… all they can do is what’s expected of them, and hope for some combination of providence and serendipity to see them through,” said Hanks.

“COVID-19, no one knows how long it’s going to go on, no one knows who’s going to die because of it… you don’t have to go very far to see the correlations and the similarities to the war years,” he told a virtual news conference.

Hanks should know. The “Saving Private Ryan” star and “Band of Brothers” producer in March became the first Hollywood A-lister to contract the deadly virus, which has killed around 130,000 in the United States as a fresh surge brings 50,000 new cases a day.

“If anybody cannot find it in themselves to practice those three very basic things, I just think, shame on you,” he said.
“Don’t be a pussy. Get on with it, do your part. It’s very, very basic.”

Hanks, a self-described history buff, based his screenplay on C. S. Forester’s 1955 novel “The Good Shepherd,” in a seven-year process that began when he spotted a second-hand copy.

“They had the original cover on it, and it was of (Commander) Ernie Krause gray-haired, undone, exhausted, uniform flapping in the wind, ships sinking and burning on the horizon,” recalled Hanks.

“And I thought — that man is exhausted. That man has been through a degree of hell.”

Director Aaron Schneider constructed a set based on the USS Kidd, the only unmodified US World War II destroyer surviving today.

For extra authenticity, some interior scenes were shot on the original ship — which survived a 1945 kamikaze attack — at a Louisiana museum.

The film itself is stuffed with military jargon, as Hanks’s captain bawls out orders.

“It feels like we’ve just placed you on a destroyer and let you loose,” said Schneider.

But with many US theaters closed due to coronavirus, Hanks admitted he was saddened that audiences will miss out on watching his passion project as a communal experience. Producers decided delaying was not worthwhile, with dozens of other blockbusters already vying for theater slots in winter and 2021, so Sony sold the movie as an Apple TV+ streaming exclusive.

“We are all heartbroken that this movie is not playing in cinemas,” said Hanks.

“But with that removed — I mean literally removed as a possibility — we were left with this as a reality. We have a movie that is ready to go, that is timely because of COVID-19,” he added.

“And we don’t know when, how, if we’re going to get out of it, and who’s going to join us on the other side.”