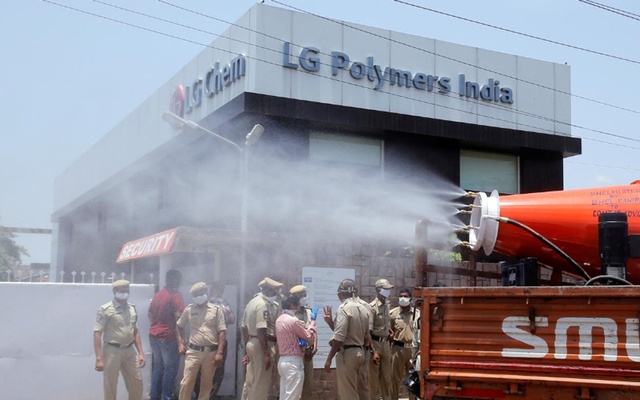 Police in India have arrested the South Korean CEO and 11 other employees of a chemical plant over a gas leak that killed 15 people and injured hundreds.

The 12 employees are accused of causing the deaths by negligence.

The deadly leak occurred at the South Korea-owned LG Polymers plant in Visakhapatnam city on 7 May.

The arrests are the result of an official investigation into the cause of the leak, which found evidence of negligence and poor safety standards.

The inquiry found that “less stringent standards may have been applied to the Indian facility due to negligence, leading eventually to the disaster”, BBC Telugu has learnt.

LG declined to comment when the BBC contacted them. But the company had issued a statement in May, saying that it was investigating the cause of the leak.

It offered “sincere condolences and apologies” to the victims and their families, and said it was looking into providing help and treatment to all of them.

Among those arrested on Wednesday are two South Korean nationals – CEO Sunkey Jiong and technical director DS Kim – who had been asked not to leave the country when the probe began in May.

Police told BBC Telugu that the other accused include the additional director of operations, three engineers and a safety officer.

Meanwhile, the state pollution control board in the southern state of Andhra Pradesh, where Visakhapatnam is located, has also suspended two environmental engineers who are being investigated for negligence – they are accused of having failed to enforce the necessary safety rules.

An earlier investigation by BBC Telugu had found evidence of negligence and reported that the plant was operating without the required environmental clearances.

On 7 May, people living in areas surrounding the plant woke up around 03:00 local time to a pungent smell and rushed from their homes suspecting a gas leak.

It later emerged that the deaths were caused by inhalation of vapours of styrene gas, a toxic compound that had leaked from the factory.

Styrene, a flammable liquid, is used in the manufacture of a range of plastics. It’s stored in tanks at temperatures under 20C because it evaporates easily and the temperature has to be monitored regularly.

Officials now believe the leak was triggered by a significant rise in the temperature.

The investigation alleges that the leak happened due to various technical flaws in the way the gas was stored: “poor design of the tank, [an] inadequate refrigeration and cooling system, the absence of circulation systems, and inadequate measurement of parameters”.

It described these as “a serious lapse” on the part of LG Polymers and said that the accident was also the result of “poor management” and “a total breakdown of the emergency response procedures”.

“LG Polymers bears absolutely liability as a polluter,” the findings of the investigation concluded.

India has a tragic history of gas leaks.

In 1984, a toxic chemical leak in a pesticide plant in the central city of Bhopal killed thousands of people in what is acknowledged to be the world’s worst industrial disaster.

More than 35 years later, victims say, children are still being born with disabilities because of the effects of the methyl isocyanate gas spill.