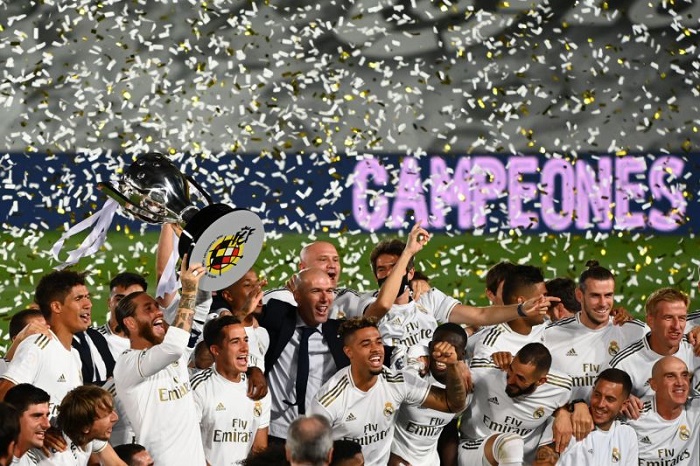 Zinedine Zidane says sealing a first La Liga title with Real Madrid in three years has made him happier than winning the Champions League.

Real wrapped up the title with a game to spare as they edged past Villarreal at an empty Alfredo Di Stefano Stadium.
Karim Benzema fired between the legs of Sergio Asenjo and added a controversial second from a retaken penalty.

In bizarre fashion, Sergio Ramos had rolled the first attempt for Benzema to smash in but the effort was disallowed.

Vicente Iborra pulled one back but it mattered little to Real as the club wrapped up their 34th Spanish title.

Zidane’s side have won all 10 of their matches since Spanish football restarted in June.

They head into the final day of the season with an unassailable seven-point lead over second-placed Barcelona.

“This is better than anything. It takes a tremendous effort to win La Liga,” said the Real Madrid boss.
“After 38 matches, you have more points than anyone else. After lockdown and everything, it’s astonishing.”

The defender was brought down as he entered the Villarreal box after a marauding run and, after a VAR check, put the ball down on the spot.

The Los Blancos captain has netted 10 times in La Liga this season but, rather than go for his 11th, dummied to strike the ball and instead rolled it to his right for the onrushing Benzema.

The forward fired past an unsuspecting Asenjo, only to for referee Alejandro Hernandez to blow his whistle for infringement – presumably by Benzema.

Real were given the option to take the penalty again and this time Benzema converted to make it 2-0.

Iborra then headed in seven minutes from time before substitute Marco Asensio thought he had re-established Real’s lead, but Benzema had handled in the build-up.

“It has been a strange season but our objective was very clear once the league restarted,” said Ramos afterwards.

“We wanted to win every game. This is the reward for all our hard work. 34 leagues, my fifth title.

“Zidane has been key, he is the captain of the ship and led us from the start of the season – we have always felt protected with Zizou. He is a unique coach.”

But not until he has savoured the second league win of his managerial career.

“This is a tremendous feeling because what these players have done is incredible. I am lost for words because I am too emotional.

Real have been playing at their reserve stadium while the Santiago Bernabeu is renovated and will not be doing their usual open-top bus parade to the Cibeles fountain in the centre of Madrid because of current safety concerns.

“It’s strange for everybody, we would have liked to have been with our fans at Cibeles but it’s not meant to be,” added Zidane.

“But I’m sure everyone is happy in their homes tonight. The fans always love to see the team win and we’ve done this for them.”