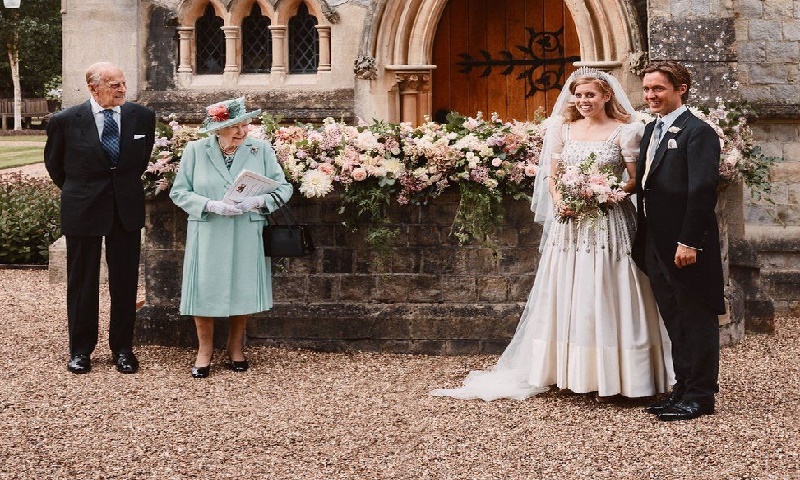 Photographs from Princess Beatrice’s wedding to property tycoon Edoardo Mapelli Mozzi have been released by Buckingham Palace.
Two official pictures were sent out the day after their small ceremony at The Royal Chapel of All Saints in Windsor.

One shows the beaming couple leaving the chapel through its flower-covered archway., BBC reported.

In the other they are outside the entrance with Beatrice’s grandparents, the Queen and the Duke of Edinburgh.

Beatrice’s parents, the Duke and Duchess of York, did not appear in either of the released photos, though the palace confirmed her father walked her down the aisle. It comes as Prince Andrew continues to keep a low profile following the arrest of his former friend Ghislaine Maxwell for sex trafficking offences, which she denies.

The Queen loaned Beatrice a vintage dress for the occasion, as well as a diamond fringe tiara which the monarch wore on her own wedding day in 1947.

The newlyweds decided to hold a private ceremony with their parents and siblings after they postponed their wedding in May due to the coronavirus pandemic.
When the national lockdown began on 23 March, weddings in England were banned under almost all circumstances. However, since 4 July, ceremonies of up to 30 people have been allowed to take place.

In a statement, the palace said the wedding was held within government guidelines.

It is believed to be the first time the Queen, 94, and Prince Philip, 99, have attended a family gathering since lockdown began.