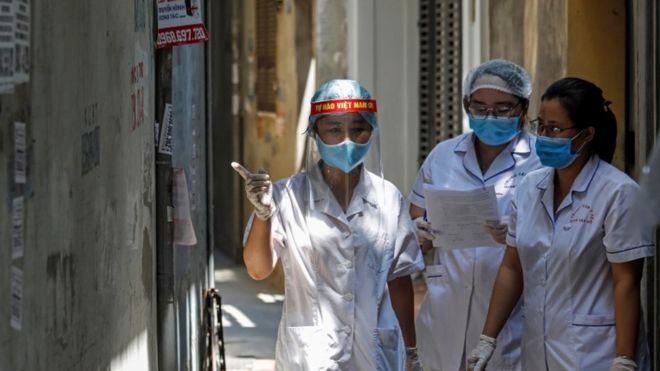 Vietnam has recorded its first Covid-19 fatality, in a devastating blow for a country proud of its zero deaths.

The 70-year-old man was from the central city of Hoi An, state media said on Friday.

No new infections had been reported for more than three months before an outbreak was reported in the nearby resort of Da Nang earlier this week.

Vietnam, which has a population of around 95 million, has reported just 509 cases since the pandemic began.

Unlike many other countries, Vietnam acted before it even had confirmed cases, closing its borders early to almost all travellers, except returning citizens. Anyone entering the country must quarantine in government facilities for 14 days and undergo testing.

And for a while, this approach appeared to be highly effective, with no new local transmissions reported since mid-April.

The country received praise for both its timely efforts to contain the virus and for the care it was able to offer a Scottish pilot who spent two months in a coma after developing Covid-19..
But earlier this week came the difficult news that new cases had been discovered in the popular resort of Da Nang.

Tens of thousands of tourists from across the country were in the city at the time, many of whom believed the threat from coronavirus had passed.

The government initially closed the city to visitors, before ordering a total local lockdown on Wednesday.

Earlier this week, Prime Minister Nguyen Xuan Phuc warned that every province and city in the country following the outbreak in Da Nang.

“We have to act more swiftly and more fiercely in order to control the outbreak,” state media quoted him as saying.