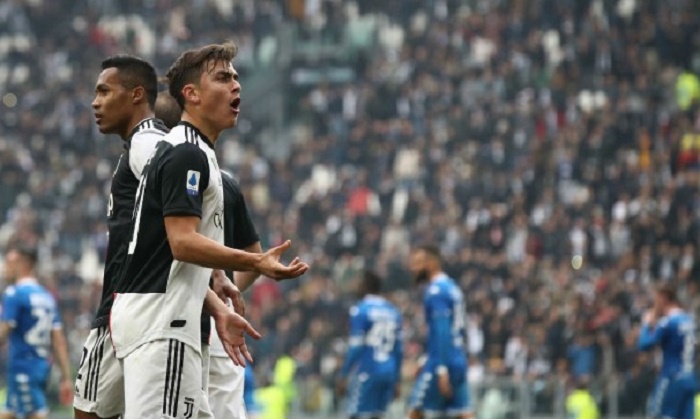 On the verge of being sold to Manchester United last summer, Paulo Dybala is once again Juventus’ talisman as the newly-crowned Italian champions race to get him ready for their Champions League showdown with Lyon.

This time last year Dybala, 26, looked to be the counterweight in Romelu Lukaku’s transfer to Turin but has since re-established himself as the fulcrum of Juve’s attack alongside Cristiano Ronaldo, scoring 16 goals in all competitions and setting up 14 more.
His form, after a slow start to the season, led to him being crowned Serie A’s ‘MVP’ on Tuesday ahead of Ronaldo and European Golden Shoe winner Ciro Immobile.

And now Dybala is reportedly on the verge of a new five-year deal with Juve, a remarkable turnaround from what at one point seemed a near-certain departure to England.

Now the Italian champions are feverishly trying to help the Argentine recover from a thigh injury picked up the night they won their ninth straight ‘Scudetto’ in the hope he can start against Lyon on Friday night.

Last week coach Maurizio Sarri said that Dybala’s “recovery process is going well”, but admitted he wasn’t sure when Dybala would return to action.

However Italian media reported on Wednesday that there is some optimism that he will be back in time to play some part the clash at the Allianz Stadium.

Juve trail the Ligue 1 side, who lost on penalties to Paris Saint-Germain in the French League Cup final at the weekend, following their 1-0 defeat in France six months ago.
Juve form fears

Despite winning the league with two matches to spare — having restarted the 2019-20 campaign in June just a point ahead of nearest challengers Lazio — their form at the end of the campaign has raised concerns that they might not make the final eight tournament in Lisbon later this month.

They finished the season with just two wins and four defeats in their final eight matches, with performances throughout the season rarely hitting the heights of the famed ‘Sarriball’ their coach achieved at Napoli.

In the 12 games between Serie A’s return from the coronavirus lockdown and the end of the league campaign Juve conceded 19 goals, nearly half the overall tally of 43 in the ‘goals against’ column.

Sarri has accused the league of “creating problems” for his team with a packed schedule and had threatened to play Juve’s under-23 side against Roma on the final weekend, a match which ended in a thumping 3-1 defeat.

“We’ve switched off in the last few matches, now we need to turn it back on again for Lyon,” Sarri admitted after that loss, the first time Roma had ever earned points at the Allianz Stadium.

“Getting all the switches reconnected won’t come automatically.”

His players may be tired but they will certainly have more match fitness than Lyon, whose shootout loss to PSG following a goalless draw was their first match since early March.

“It’s true that a team playing every three days will be tired and have injuries but the fact that Juventus have won something before allows them to recover,” Lyon coach Rudi Garcia said in an interview in Italian daily Gazzetta dello Sport.

“To play 120 minutes against that PSG attack without conceding is a good sign. And it’s not like we spent the whole game in our area — we had the same possession and took more shots than them”.

Former Roma coach Garcia, who will be able to count on key forward Memphis Depay after his return from a serious knee injury in Friday’s final, told the Gazzetta that he is aiming for a similar display in Turin, saying that “we’re not going to defend the whole match”.

“We need to find a way to score a goal, if that happens it will be difficult to knock us out,” he said.