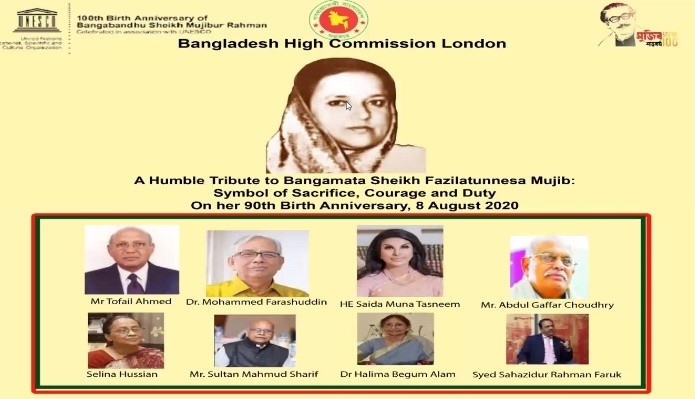 Eminent speakers from the UK and Bangladesh at a memorial programme has underscored the need for doing research and publishing information in English through international publications on the life and works of Bangamata Sheikh Fazilatunnesa Mujib for the new generation people.

They came up with the remarks at a commemorative programme titled ‘Bangamata Sheikh Fazilatunnesa Mujib: A Symbol of Sacrifice, Courage and Duty’ organized by Bangladesh High Commission London yesterday on the occasion of the 90th birth anniversary of Bangamata, a press release said here today.

Bangladesh High Commissioner to the United Kingdom (UK) Saida Muna Tasnim presided over the programme while former lawmaker and a close political activist of Father of the Nation Bangabandhu Sheikh Mujibur Rahman, Tofail Ahmed attended it as chief guest.

Bangabandhu’s private secretary and former governor of Bangladesh Bank Dr Mohammed Farashuddin Ahmed and renowned novelist and writer of the subcontinent Selina Hossain were also present on the occasion from Bangladesh.

Renowned journalist and columnist Abdul Gaffar Chowdhury, one of the organizers of the Liberation War in the United Kingdom (UK) Sultan Mahmud Sharif, AL leader in UK Syed Sajidur Rahman Farooq and UK expatriate and a doctor associated with Bangamata, Halima Begum Alam were present as the special guests from UK sides in the programme.

A large number of expatriate Bangladeshis and many young and elderly people from different countries including the UK, Ireland, Europe and Middle East expressed their deep love and respect for Bangamata through webinars in the programme.

Tofail Ahmed said :“Bangladesh and Bangabandhu are as synonymous as Bangabandhu and Bangamata. They were complementary to each other. Bangamata was deeply involved in every event of Bangabandhu’s life. ”

Bangamata was also a source of immense inspiration in student politics at that time and she supported to form the Sarbadaliya Chhatra Sangram Parishad, he added.

In her welcome address, Bangladesh High Commissioner to the United Kingdom (UK) Saida Muna Tasnim paid deep respects to Bangabandhu’s uncompromising fighting wife and majestic woman Bangamata and said : “She will always remain in the heart of the Bengali nation and in the history of the Bengali nation as an extraordinary and exemplary role model.”

Dr Mohammed Farashuddin Ahmed suggested to make the history of Bangladesh Liberation War and the biography of Bangamata compulsory in the secondary-level curriculum in Bangladesh.

At the beginning of the programme, the Holy Quran was recited and prayers were offered to pay homage to the memories of the martyrs of August 15, 1975, including Bangabandhu and Bangamata.

Later, a documentary on the life of Bangamata was displayed.