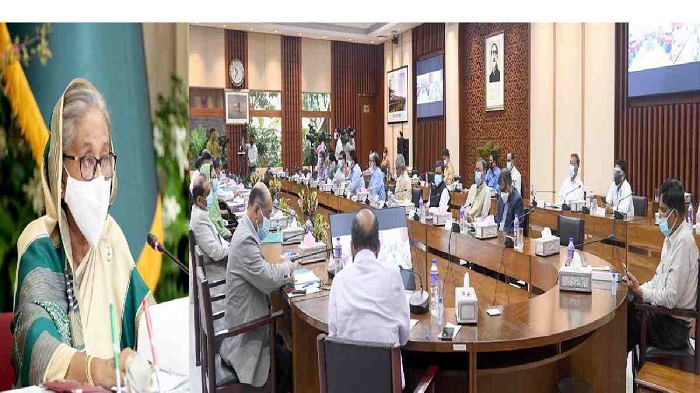 The government on Tuesday approved four projects with an overall estimated cost of Taka 1,668.29 crore, including a Taka 566.76 crore project to develop the runways of three domestic airports at Jashore, Syedpur and Rajshahi in a bid to ensure safe landing and take-off of the aircraft there.

The approval came from a meeting of the Executive Committee of the National Economic Council (ECNEC) held virtually today with its Chairperson and Prime Minister Sheikh Hasina in the chair.

The Prime Minister joined the meeting from her official Ganabhaban residence through videoconferencing while other ECNEC members were connected from the NEC Conference Room in the city’s Sher-e-Bangla Nagar area.

Of the total cost, he said, some Taka 1,524.78 crore will be financed from the government fund, while the rest Taka 143.51 crore will come from the concerned organization’s own funds.

Among the four approved projects, three projects are fresh while the rest one is a revised project.

Talking about the project titled ‘Asphalt Concrete Overlaying on the Runway Surface of Jashore Airport, Syedpur Airport and Shah Makhdum Airport, Rajshahi’, the senior secretary said the project will be implemented from January 2021 to June 2023 at a cost of Taka 566.76 crore.

The major project operations include Asphalt Concrete Overlaying on the airport runway surfaces, upgrading of airfield ground lighting system, development of drainage system including runway side-strips, procurement of a modern fire extinguish vehicle for each airport.

During the approval of the project, Ashadul Islam the Prime Minister directed the authorities concerned to install proper lighting system at the domestic airports so that the flights can land and take off at night also.

“Since the use of the airports is on rise, it’ll have to install the lighting system there so that the aircraft can land and take off there at night,” the premier was quoted as saying.

In this regard, the civil aviation and tourism secretary in the ECNEC meeting informed that they have a plan to install the lighting system in the airports on completion of the runway upgrading works.

The Prime Minister said the airports will have to be modernised properly in phases with their growing use following the rise of economic activities due to establishment of economic zones.