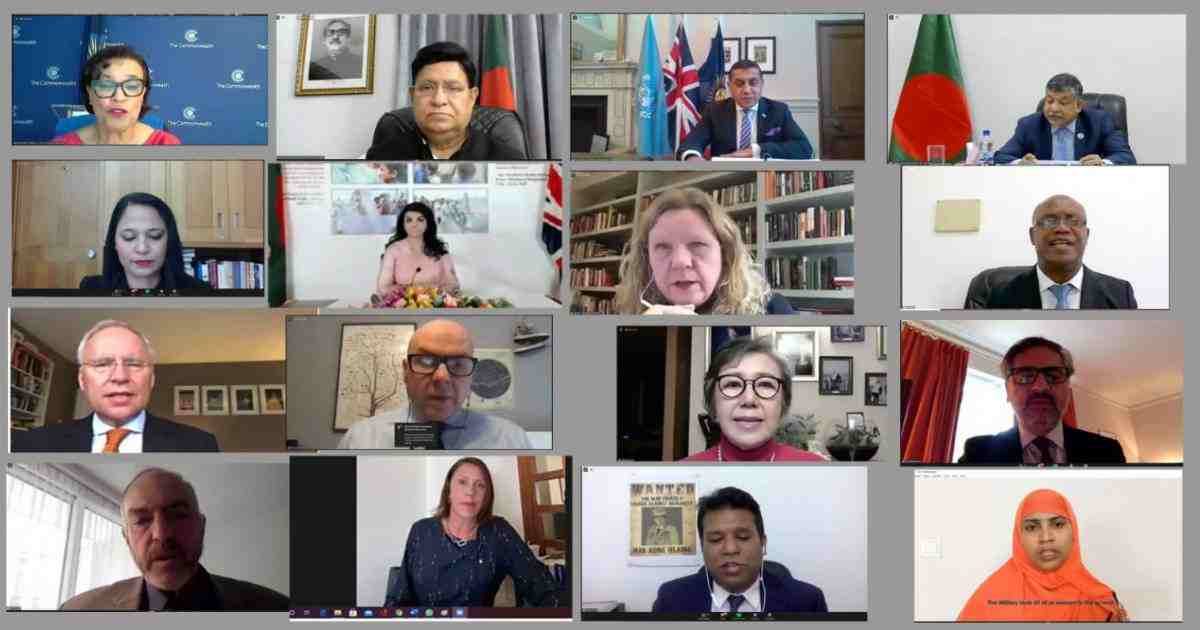 The UK government is committed to continuing its role in the UN Security Council (UNSC) to highlight the plight of the Rohingyas, says British Minister of State for South Asia and the Commonwealth at the UK Foreign, Commonwealth & Development Office (FCDO) Lord Ahmad of Wimbledon.

He praised Prime Minister Sheikh Hasina for hosting over a million Rohingyas in Cox’s Bazar and reassured that the UK would continue to stand alongside both the Rohingya community and the government of Bangladesh.

Speaking at a virtual high-level event titled “Towards Sustainable Justice, Accountability and Returns: The Rohingya Crisis into its Fourth Year” on Tuesday evening, Lord Ahmad said the UK attaches top priority to resolve the Rohingya crisis.

The event was co-hosted by high commissions of Bangladesh and Canada in the United Kingdom and the Commonwealth Secretary-General.

Foreign Minister Momen cautioned the international community that if the emerging culture of defiance, impunity and geopolitical appeasement of Myanmar continue, then there will be no sustainable solution to the Rohingya crisis in the near future.

He called the United Kingdom as the Chair-in-Office of the Commonwealth for providing advisory support to the ICJ’s ongoing proceedings.

In the keynote paper titled “Towards a sustainable return of Rohingyas”, Foreign Secretary Masud Bin Momen highlighted the 13-point demands of the Rohingyas to the government of Myanmar, which remains the biggest challenge to their voluntary return to their homeland.

These include amendment to the 1982 citizenship act of Myanmar to give legal status to the Rohingyas as an ethnic minority; and their freedom and rights.

Secretary Masud called upon various international investigative and accountability mechanisms to ensure Myanmar’s compliance with those decisions which mirror the Rohingyas’ 13-point demands.

The Foreign Secretary also called for adopting a separate declaration at the Kigali Summit on international justice and accountability for the Rohingyas towards finding a lasting solution to the protracted crisis.

High Commissioner Saida Muna Tasneem commended the UK’s diplomatic leadership role at the UN Security Council as the penholder for Myanmar and as Chair-in-Office at the Commonwealth on questions of accountability and justice for the Rohingyas.

She thanked the UK government for its generous support to the Rohingyas in Cox’s Bazar.

Praising Prime Minister Sheikh Hasina for her leadership in response to the Rohingya crisis and showing her great humanity, Commonwealth Secretary-General Patricia Scotland said while Bangladesh has gone above and beyond in supporting Rohingyas, the responsibility is now on all of us to step up, to help address this prolonged crisis.

Canadian High Commissioner Janice Charette said her government would continue its work and engagement to address the root causes of the persecution of the Rohingyas to ensure their eventual voluntary, dignified, safe and sustainable return to Myanmar.

Hussein Thomasi, Special Adviser to the Justice Minister (State Minister), Ministry of Justice of Gambia, spoke as the special guest and briefed his government’s position in the ICJ case on the Gambia vs Myanmar case (Rohingya genocide case filed last year).

Chair of the All-Party Parliamentary Group on Rohingyas in the UK Parliament Rushanara Ali, also spoke in the panel discussion where she strongly advocated that the UK government should join with Canada and the Netherlands to intervene in the ICJ case Gambia vs Myanmar.

She said the European Union and its allies should not have prematurely withdrawn the embargos against Myanmar which has given rise to Myanmar government’s defiance of international justice and accountability mechanisms.

President of Burmese Rohingya Organization in the UK Maung Tun Khin, whose grandfather was a member of Myanmar parliament, gave a historic account on how civil, political and social rights were snatched by the military junta of Myanmar.

Tun Khin said he also voted for Aung San Suu Kyi in the hope that she would ensure justice for the Rohingyas but sadly found her on the opposite side.

At the event, Hasina Begum, a Rohingya woman victim of gang rape, gave a horrific account of violence and atrocities on her families and relatives.

A number of high-profile international legal and human rights experts on the Myanmar case, including Head of the Independent Investigative Mechanism for Myanmar under the UN Human Rights Council Nicholas Koumjiian, ICJ Counsel to the Gambia and ICJ Counsel to Bangladesh Prof Payam Akhavan, Executive Director, the Global Centre for the Responsibility to Protect Dr Simon Adams, former Special Rapporteur on Myanmar Prof Yanghee Lee and former Investigator to the UN Independent International Fact-Finding Mission on Myanmar and Executive Director of Legal Action Worldwide Antonia Mulvey participated in the panel discussion.