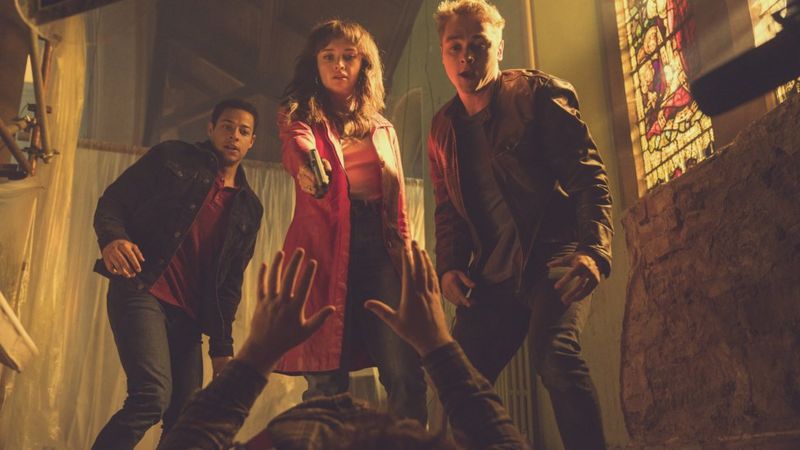 The young British stars of Irish road movie Pixie tell BBC News why their anarchic crime comedy could be just the tonic in these uncertain times.

Given the current restrictions governing how we work, travel and go about our daily lives, the idea of taking an impromptu, free-wheeling road trip feels like an impossibly fanciful pipe dream.

For those to whom the notion appeals, though, there’s Pixie: a riotous road movie in which three young people make just such a journey down the west coast of Ireland.

Admittedly, this particular road trip comes with a dead body in the trunk, a cache of stolen drugs and a deadly rendezvous with some gun-toting nuns at the end of it.

Even so, Barnaby Thompson’s darkly comic caper – conceived and written by his son Preston – enables audiences to vicariously visit a world blissfully free of coronavirus.

At its centre, though, is Pixie herself: an unpredictable wild child with a craving for adventure whose dreams are far bigger than the Sligo backwater she calls home.

With her sharp wits and sharper tongue, she’s a match for anyone – not least friends Frank and Harland, who are drawn into her orbit when they stumble upon a drug deal she is cooking up with two of her boyfriends.

To quote local drug dealer Daniel (played by Chris Walley from BBC Three’s The Young Offenders): “She won’t just break you… she’ll take a Kalashnikov to your heart!”

Small wonder that actress Olivia Cooke, best known for her roles in Steven Spielberg’s Ready Player One and ITV’s recent Vanity Fair adaptation, jumped at the chance to play her.

“She’s daring and she’s dangerous,” Cooke tells BBC News. “She’s got this self-awareness and she knows the effect she has on the people around her.

“It was the first proper comedy I’ve ever filmed, so to play someone who is so in the know and so manipulative was really fun.”

Though born in Oldham, the 26-year-old actress had little difficulty wrapping her tonsils around her character’s Sligo accent.

“When you break accents down there are certain sounds that pertain to your accent already,” she explains.

“There are a lot of sounds within the Oldham accent you can find in a Sligo accent, even though it sounds completely different.”

For his part, former EastEnders actor Ben Hardy “tried not to worry too much about the accent” of his character Frank “and focus on the performance”.

“It’s set in a small town in Ireland and I’m from quite a small town in England, so I felt there were some similarities I could draw on,” says the 29-year-old Bournemouth native.

Much of the film takes place inside the car that Pixie, Frank and Harland use to transport themselves, some illicit MDMA and the dead body.

Luckily the prospect of spending extended shooting days in close proximity with her co-stars was not an issue for Olivia.

“When you first meet the actors that you’re working with there is a subtle sussing out,” she concedes. “But we really got on and the rapport came naturally.

“You have to make the most of those long days when you’re crammed in a car together, making up stories and taking the [expletive] out of each other.”

“We hit it off from the get-go,” agrees Hardy, recently seen as Queen’s Roger Taylor in Bohemian Rhapsody. “We had a very natural chemistry.

“We were in the car for long periods of time but I was thankful for that. It was freezing so I was happy to get in there and turn the air conditioning on.”

Peaky Blinders star Daryl McCormack makes up the third part of the trio, who at one point decide to go swimming in the Atlantic Ocean.

“Oh god, that was absolutely freezing,” recalls Hardy. “But all three of us were in the same boat and we just threw ourselves into it.”

While some disrobing was involved, though, Cooke reveals there was no need to get too close to the bone-chilling water.

“They cut before we even got in the ocean,” she recalls. “I think we maybe paddled into the shallow bit but that was about it.

“We were all down to jump in but Barnaby was like, ‘no, we’ve got the shot as far as we need to go’.”

In fact, the only scene that caused Hardy any real concern was the climactic gunfight, an explosive confrontation set inside a derelict church.

The scene, which sees nuns and priests with guns face off against gangsters in animal face masks, was shot in an abandoned church in Belfast.

“I’ve never trashed a church before so I’m not exactly sure how I feel about that, growing up a good Catholic boy,” he laughs.

“There was a bit of guilt there but it’s all very light-hearted and it adds to the tongue-in-cheek style of the whole thing.”

All in all, Cooke and Hardy have nothing but good memories to share about the seven weeks Pixie took to make last autumn.

“I did feel the tone of the film carried over into the dinners we had and the weekends we shared together,” the former reveals.

“Alec [Baldwin] was only there for three days but he was lovely – he took us out to dinner and was quite the host.

“Sometimes after doing a drama you come away feeling a bit heavy, so it was nice to make the crew laugh rather than cry,” Cooke continues.

She is hopeful, therefore, that Pixie will entice wary audiences back into cinemas that are in dire need of both fresh product and customers.

“Escapism is just what people need, especially in a world that’s getting scarier and scarier,” she declares.

“If I’m okay to get on a packed tube, I definitely feel comfortable enough to go the cinema if I socially distance and wear a mask.”

“I’d like people to see the movie in some way or form, be it in a cinema now or on a streaming platform later,” says Hardy.

“Hopefully it will give some people some light-hearted relief from the current situation. We could all do with some of that right now.”

Pixie is released in UK & Ireland cinemas on 23 October.