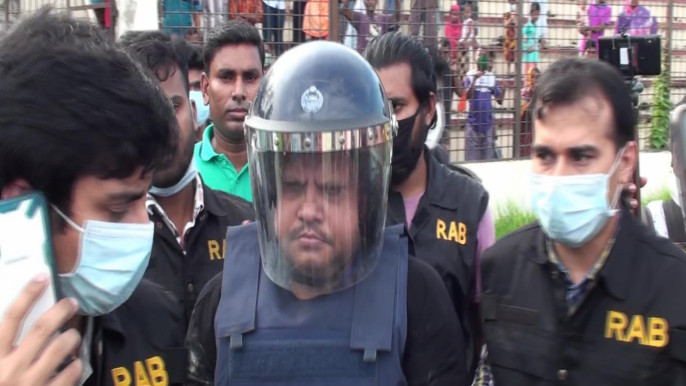 Shahed, who after taking stones from Shamsul provided two cheques of Tk10 lakh and another of Tk50,000. All three of the cheques were dishonoured by a bank due to not having the amount in the account. Separate cases were filed for each of the cheques.

Confirming the matter, Assistant Public Prosecutor (APP) of Sylhet District and Session Judge, Abdus Sattar, also lawyer of the plaintiff, said Shamsul supplied stones worth Tk30 lakh to Shahed, but on several occasions was denied pay. “At one point Shahed gave my client pay cheques, all of which were dishonoured.”

Previously on October 11, Shahed was produced before a Chittagong court in connection with a case filed with Chittagong’s Double Mooring police station for misappropriating Tk 91 lakh from a businessman.

So far he has over 50 cases filed against him. According to RAB’s intel to July, Shahed embezzled around Tk2.50 crore to Tk3 crore from different people through different fraudulent activities.

According to sources, he embezzled over Tk100 crore from two multi-level marketing (MLM) companies.

Previously on September 28, a Dhaka court had sentenced Shahed to life term imprisonment in an arms case.

Shahed was arrested by Rapid Action Battalion (RAB) from Satkhira in the early hours of July 15 when he was trying to flee to India on a boat. He was later airlifted to the capital.

Four days later, a DB police team found Shahed’s car in front of a house on Sector 11 in Uttara West area. They seized a pistol with a single bullet from the car and the case was filed under the Arms Act at Uttara West police station.

Shahed was on the run since health officials and RAB raided the Uttara and Mirpur branches of Regent Hospital on July 6, following complaints that the hospital was issuing fake Covid-19 certificates, as well as charging exorbitant fees for the testing and treatment of patients.

The next day, RAB filed a case against 17 people, including Shahed, at the police station.