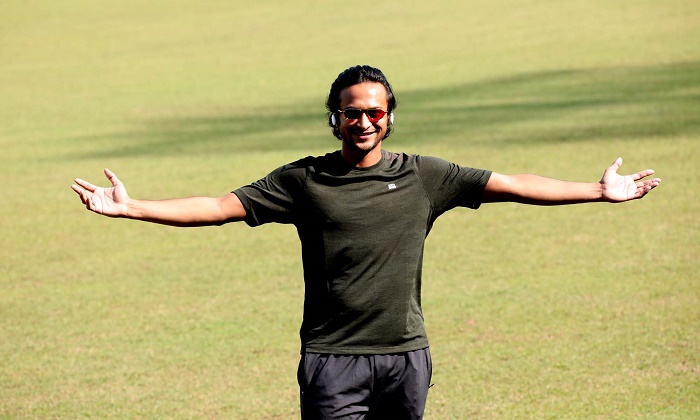 Bangladesh all-rounder Shakib Al Hasan made sure to make his presence felt at the home of cricket where he returned after a gap of 376 days though he did not take part in the fitness test or any cricketing activities on Monday.

On October 28 2019, Shakib came to BCB (Bangladesh Cricket Board) Head Quarters for a joint press conference with BCB President Nazmul Hasan Papon after being banned by ICC from all cricketing activities for two years, with one year of that sentence suspended, after he accepted three charges of breaching the ICC anti-corruption code.
Shakib arrived at the SBNS premises in the evening through the back door as he wanted to avoid the flash of cameras waiting at the main gate for him from the morning of the eventful day.

However, Shakib became eligible for return to competitive cricket from October 29, 2020 following the end of the one-year ban and he looked in no mood to play hide and seek as he spent a busy day at SBNCS (Sher-e-Bangla National Cricket Stadium).

Shakib, who reclaimed his spot in ICC ODI ranking following his one year ban, looked hardly bothered with anything of the past as he carried a smile on his face coupled with a very expressive body language which only suggested he is all set to dictate terms in the coming day as he is back in business.

Shakib arrived at the SBNCS at eight in the morning and went straight to the dressing room just to have a look at it as he probably missed it the most.

To his surprise, he was welcomed by his Bangladesh Krira Shikkha Protisthan (BKSP) mate Mushfiqur Rahim and the duo looked busy travelling through the memory lane during their half an hour conversation.

Shakib, who was wearing a black trouser and a T-shirt, had a white Bluetooth head phone in his ear when he went to the indoors to report for the fitness test that was later rescheduled for Wednesday as BCB did not want him to do the fitness test with other cricketers as they are not sure about whether any of them were carrying coronavirus considering apart from Shakib, no one had come to the premise with a recent corona negative report.
Shakib had to bring the corona negative report as it paved way for him to be eligible to take part in the fitness test as he arrived from USA on October 5, where he spent a major part of the last year surrounded by his in-laws and family members.

The corona report will be enough for him to take part in the upcoming Bangabandhu T20 as BCB is expected to request the health authorities to waive Shakib of the quarantine if he was tested COVID-19 negative.

As he was carrying spikes in his hand while going to the indoor, many felt that he might run but that eventually did not happen but while returning from the indoor he did not waste the chance to have a look at the wicket of SBNCS as he stopped and had a close look.

Shakib did not forget the art of posing for the photographers. He did that in style as he came out of the dressing room on couple of occasion during his stay at Mirpur.

Shakib, who was seen joking with Mustafizur Rahman, also had the chance to meet Tamim Iqbal as he came to practice in BCB academy premises to prepare himself for the upcoming PSL (Pakistan Super League) play-off.

Few other national cricketers also came to practice as they are preparing for the upcoming T20 league and as a result it provided an opportunity for Shakib to have an informal meeting with them probably to clear his stance.

Shakib admitted earlier that despite receiving warm welcome by his teammates through statements at their social media platform, he’d understand it if anyone still doubts him.

“It is not easy to know about everyone’s feelings. They may doubt me or not trust me, I am not denying it. But I have been in touch with almost everyone so I haven’t felt it. I am hopeful it won’t be a problem, and they will believe me like they used to. But it is not impossible for them to have a bit of doubt. There wouldn’t be any regret about it,” Shakib told media a day before he arrived to Bangladesh.

Whether his teammates still doubt him is a matter which can only be cleared in the future but he did not leave any stone unturned to make sure that he sent his message through that he is back.