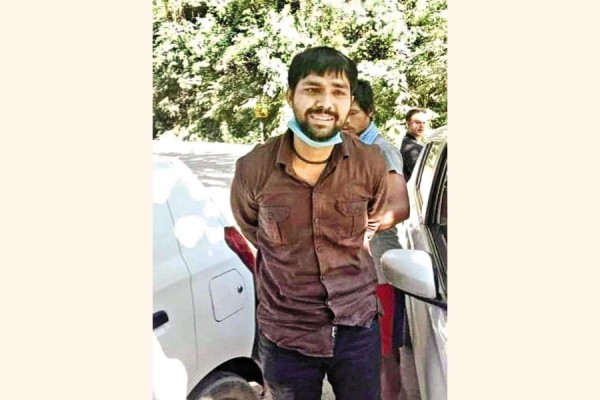 A Sylhet court on Tuesday allowed the PBI to take sub-Inspector (SI) Akbar Hossain Bhuiyan in its custody for seven days for interrogation in the case filed for torturing Raihan Ahmed to death at Bandar Bazar police outpost in Sylhet on October 11.

The court of Sylhet Chief Metropolitan Magistrate (CMM) Abul Kashem granted the remand after inspector of Police Bureau of Investigation (PBI) and also the investigation officer in the case Awlad Hossain produced him before it with a 10-day remand prayer.
The suspended police officer was apprehended on Monday at the Dona bordering area in Kanaighat upazila of Sylhet.

Later in the day, Sylhet Range Police handed over Akbar to the Police Bureau of Investigation (PBI), who are now investigating the case.

On October 11, Rayhan Ahmed, 34, a resident of Akharia in Sylhet city, was beaten to death in police custody at Bandarbazar Police outpost, said the victim’s family.

His wife Tahmina Akter Tanni filed a case at Kotwali Police Station on the following day accusing a number of unidentified people.

Three policemen including Ashek were withdrawn on the same day.
The case was transferred to the PBI.

Besides, the SMP formed an investigation committee, headed by its Additional Deputy Commissioner Shahrier Al Mamun, to look into the death of Rayhan. After a primary investigation, they found some policemen guilty of foul play.

After the autopsy, doctors said they found 111 injury marks on Rayhan’s body and two of his nails were pulled out.

On October 22, former SMP Commissioner Golam Kibria was transferred over widespread criticism of the role of police after the death of Rayhan.