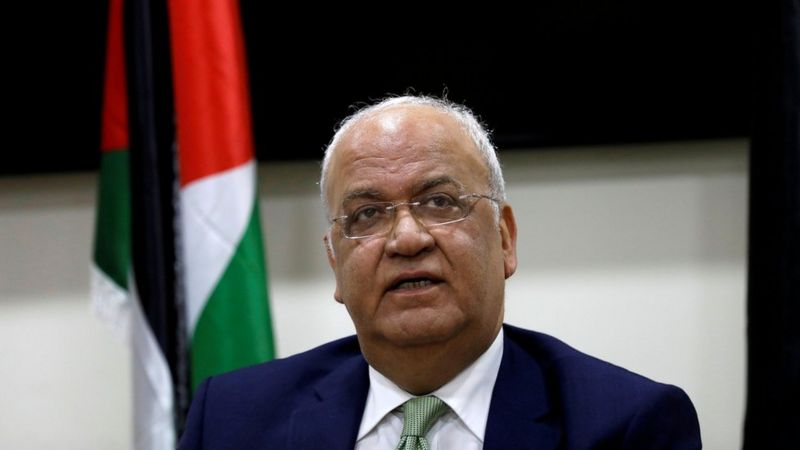 One of the most prominent Palestinian political figures, Saeb Erekat, has died with Covid-19, Palestinian officials say.

The 65-year-old passed away at Hadassah Medical Center in Jerusalem.
Erekat was secretary general of the Palestine Liberation Organisation (PLO) and an adviser to Palestinian Authority President Mahmoud Abbas.

He was the Palestinians’ chief negotiator in peace talks with Israel for the past two and a half decades.

Erekat helped negotiate the landmark Oslo Accords in 1993, which created the Palestinian Authority and gave Palestinians limited self-governance in the West Bank and Gaza Strip for the first time since Israel occupied the territories in 1967.

He announced on 8 October that he had tested positive for coronavirus but his condition deteriorated and he was transferred to the Israeli hospital from his home in Jericho in the West Bank 11 days later.

Doctors said that treating him was a “huge challenge” because he had undergone a lung transplant three years ago and had a “weakened immune system and bacterial infection, in addition to coronavirus”.

Saeb Erekat believed in a two-state solution and condemned the recent normalisation of ties between Israel and the United Arab Emirates
Before his death he was put on a ventilator and placed in a medically induced coma.

Erekat was a proponent of the so-called two-state solution – an independent Palestinian state alongside Israel – to the Israel-Palestinian conflict, and recently condemned moves by Arab states to normalise relations with Israel without it.

He called the UAE’s decision in August to formalise ties with Israel as “a killer to the two-state solution” and said the US was “part of the problem and becoming more irrelevant in the Middle East” over its support for Israel under President Donald Trump.

Erekat also called for international sanctions on Israel over its occupation of the West Bank, East Jerusalem and the Gaza Strip, and for a boycott of Israeli companies operating in the occupied territories.