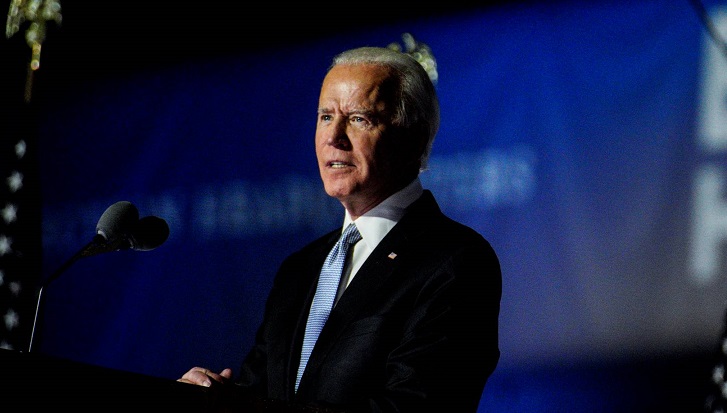 President-elect Joe Biden on Tuesday called President Donald Trump’s refusal to concede his election loss an “embarrassment” but dismissed the standoff as unimportant.

“I just think it’s an embarrassment, quite frankly,” Biden said when asked what he thinks about Trump’s refusal to acknowledge defeat in the November 3 election.

“How can I say this tactfully? I think it will not help the president’s legacy,” Biden told reporters in his home town of Wilmington, Delaware.

A week after the US election, Trump remained shut up in the White House, pushing an alternate reality that he is about to win and filing lawsuits alleging voter fraud that so far have been backed up by only the flimsiest evidence.

“The fact that they’re not willing to acknowledge we won at this point is not of much consequence in our planning,” Biden said.

The Democrat signaled that despite attempts by Trump to stymie his transition to power he was increasingly a president in waiting.

Asked what his message to them was, he said: “I’m letting them know that America is back. We’re going to be back in the game. It’s not America alone.”

Trump’s attempt to hold on to power has become all consuming for the man who often makes a point of publicly mocking rivals as “losers.”

“WE WILL WIN!” the Republican president tweeted early Tuesday, referring to his so far unsuccessful lawsuits. “WATCH FOR MASSIVE BALLOT COUNTING ABUSE.”

Emphasizing the atmosphere of intransigence, Secretary of State Mike Pompeo said in a testy news conference that he was preparing for “a smooth transition to a second Trump administration.”

Since Election Day, Trump has made few public appearances and seems to have all but shelved normal presidential duties.

His only known activities outside the White House have been to play golf twice over the weekend, after the results came in.

Normally routine secret presidential intelligence briefings have been off the daily schedule. He has made no mention of the dramatic rebound in the Covid-19 pandemic across the country.

And his once near daily press conferences, interviews with Fox News or impromptu question-and-answer sessions with White House journalists have dried up.

In place of that, Trump has spent much of his time tweeting, mostly about what he claims is the stolen election.

Trump’s only significant presidential action has been the abrupt firing of defense secretary Mark Esper on Monday, which he announced on Twitter.

Exactly four years ago Tuesday, Trump had just scored his surprise victory against Hillary Clinton and toured the White House for the first time as a guest of Barack Obama.

That courtesy to a presidents-elect is an old tradition, highlighting the nation’s near sacred respect for the peaceful transfer of power.

Trump has not only failed to invite Biden for a chat in the Oval Office, he is blocking the Democrat from access to facilities, funding and expertise that usually come in a ready made package to help the incoming leader.

Release of this transition aid is controlled by the General Services Administration head Emily Murphy, who was appointed by Trump.

Biden, who won with a record number of votes but acknowledges that nearly half the electorate nevertheless backed Trump, is avoiding a fight.

He said Tuesday that he did not favor taking legal action to force Trump into complying and said with a smile: “Mr President, I look forward to speaking with you.”

Biden has set up a coronavirus task force, is vetting potential cabinet members and on Tuesday delivering his latest policy speech — this time on the fate of the Obamacare health care plan which Trump wants the Supreme Court to dismantle.

The latest major foreign leader to reach out with congratulations, ignoring Trump’s claim that he won last Tuesday, was Turkish President Recep Tayyip Erdogan, who referred to Biden’s “election success.”

Washington is buzzing with speculation over who, if anyone, in Trump’s inner circle will finally persuade him to go.

Former President George W. Bush, the only living Republican ex-president, congratulated Biden on his victory, but he is an outlier in a party dominated by the still hugely popular Trump.

On Monday, the Republican leader in Congress, Senator Mitch McConnell, said Trump was “100 percent within his rights” to challenge the election in court.

None of the lawsuits appears to have the potential to change the result of votes and even a planned recount of Biden’s paper-thin victory in Georgia, or anywhere else, would be unlikely to change the fundamental math.

But Trump added a potential new weapon to his crusade against the results on Monday when his attorney general, Bill Barr, agreed to authorize probes into “specific allegations” of fraud.

Barr added a caveat that “specious, speculative, fanciful or far-fetched claims should not be a basis for initiating federal inquiries.”

However, Barr’s unusual intervention in the dispute prompted worries that Trump will go even further in his efforts. The Justice Department’s top election crimes prosecutor, Richard Pilger, resigned in protest.

Biden’s inauguration is on January 20.