5.5km of Padma Bridge visible after installation of 37th span 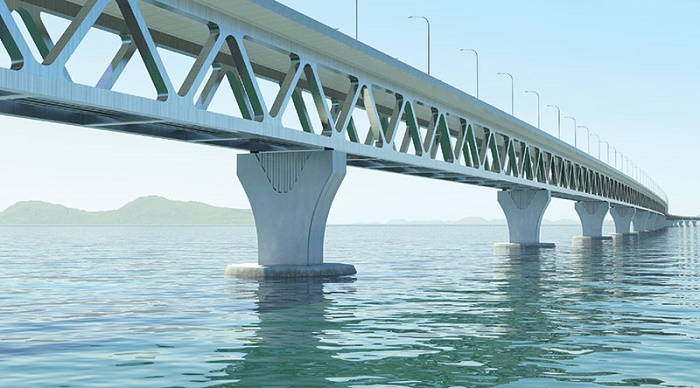 The 37th span of the Padma Bridge was installed on Thursday, bringing a total of over 5.5 kilometers of the structure into view.

The span number ‘2C’ was installed successfully between pillars 9 and 10 at Mawa end in Munshiganj around 2:45pm, six days after the last one was set up, said Executive Engineer (Bridge) Dewan Md Abdul Kader.
Earlier, the 36th span of Padma Bridge was installed on November 6.

According to the Padma Bridge authorities, the 6.15km-long bridge with a total of 41 spans will become visible in December and the entire Padma Bridge will be seen by the beginning of 2021.

The Padma Bridge is the largest construction infrastructure since the independence of Bangladesh, which was initiated by Prime Minister Sheikh Hasina. The construction work began in December, 2014 with own fund.

The construction of the main bridge is being carried out by China Major Bridge Engineering Company, a Chinese contractor, while Sino Hydro Corporation, another Chinese company, is working on river management.

The 6.15 km long bridge will have two segments over which road and railways will be set up.