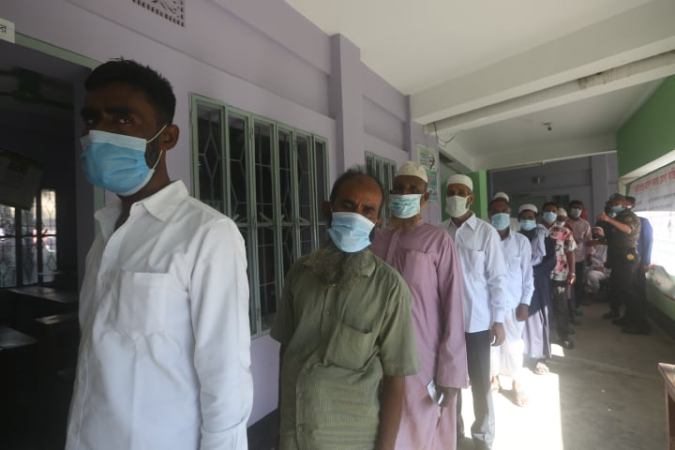 By-elections in two parliamentary constituencies — Dhaka-18 and Sirajganj-1 — are underway with participation of the two major parties, Awami League (AL) and Bangladesh Nationalist Party (BNP), along with contenders from other political parties.

The voting started with the use of Electronic Voting Machines (EVMs) at 8:00am and will continue till 4:00pm without any recess.
Six contenders including AL nominated Md Habib Hasan, BNP nominated SM Jahangir, Jatiya Party’s Nasir Uddin Sarkar are in the election race in Dhaka-18.

There are 577,773 voters under 215 polling stations in Dhaka-18, comprising the 14 wards and Airport area under Dhaka North City Corporation (DNCC). The DNCC wards are 1, 17 and 43-54, located in Uttara, Cantonment and Gulshan Thana respectively.

In Sirajganj-1, two candidates — AL’s Tanvir Shakil Joy and BNP’s Selim Reza — are in the electoral race. There are 345,603 voters under 168 polling stations in the constituency, comprised of Kazipur Upazila and five unions of Sirajganj Sadar upazila.

The Election Commission (EC) imposed restrictions on movement of vehicles — particularly motorcycles, private cars, trucks and other motorised vehicles — in the election areas.

2020-11-12
Mr. Admin
Previous: Joe Biden picks Ron Klain as White House chief of staff
Next: US has many things to learn from Bangladesh’s election: CEC