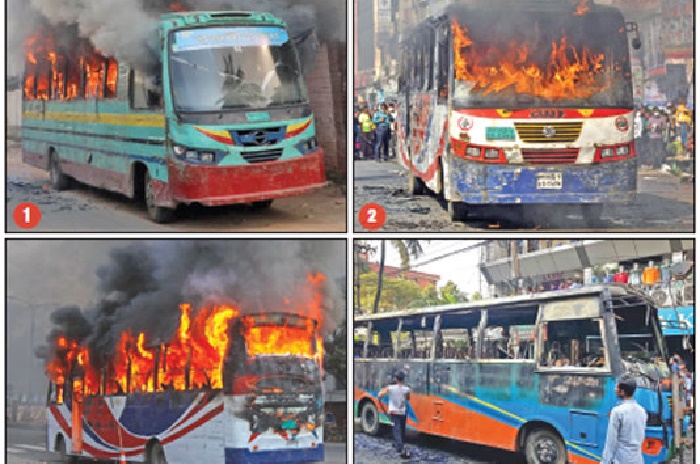 Police have filed more cases against BNP leaders and activists on charge of torching buses, throwing crude and petrol bombs in different areas of the capital to foil Dhaka-18 by-polls on Thursday.

Thirty-two people have been arrested so far in connection with the incidents.
Among the cases, two were filed with Uttara East Police Station on Friday.

Confirming the news, Nure Alam Siddique, officer-in-charge of the police station, said that one was filed naming 19 persons for arson attack on a bus in Azampur area, and another against 28 persons for exploding crude bombs in front of a polling centre — on the election day.

BNP’s candidate for Dhaka-18 SM Jahangir was mentioned as the mastermind behind the incident, police said.

Meanwhile, Jahangir was also made the prime accused in a case filed with Airport Police Station naming 28 persons, mostly BNP men, on charge of torching a bus of Projapoti Paribahan on Dhaka-Mymensingh road near the airport, said Sub-inspector Asaduzzaman Sheikh of Airport Police Station.

Police filed another case with Khilkhet Police Station accusing more than 100 persons, including Jahangir, after a bus was torched near Kuril Flyover.

Earlier, the law enforcers filed 10 cases with seven police stations against nearly 500 named accused, mostly activists of BNP and its front organisations over arson attacks on buses on different city streets on Thursday.