Main structure of Padma Bridge to be visible by Dec 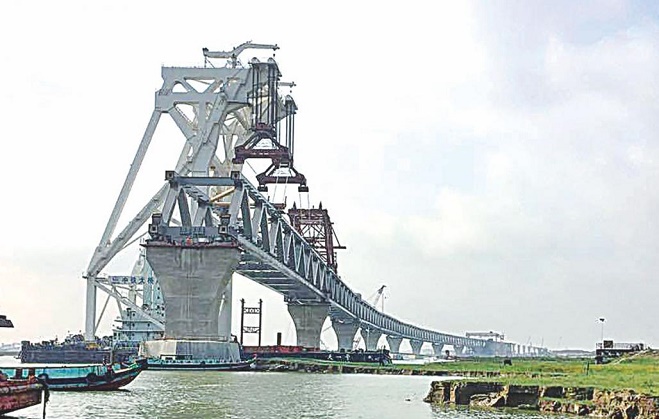 The 6.15km-long Padma Bridge is expected to be visible completely by December as preparation is underway to install the four remaining spans soon.

“We are hopeful about setting up the remaining four spans by December. Then the main structure of the mega bridge will be visible,” Project Director of Padma Multipurpose Bridge Md Shafiqul Islam informed journalist, reports BSS on Saturday.

He said the 37th span of the Padma Bridge was installed this month and now a total of 5,550 kilometers of the main structure is visible.

The Padma Bridge is the largest infrastructure in Bangladesh, which was initiated by Prime Minister Sheikh Hasina. The construction work began in December, 2014 with own fund.

Economists said the Padma Bridge will help build an integrated communication network in the country, which will change the economic landscape of southwestern Bangladesh.

The government is optimistic that the new mega structure could boost the GDP of the country by 1.2 percent when it is completed by December 2021, they said.

The region will witness a breakthrough in development following the completion of Padma Bridge and investment and employment will also go up significantly.

The construction of the main bridge is being carried out by China Major Bridge Engineering Company, a Chinese contractor, while Sino Hydro Corporation, another Chinese company, is working on river training.

The multi-purpose Padma Bridge is expected to open for traffic movement in 2021.