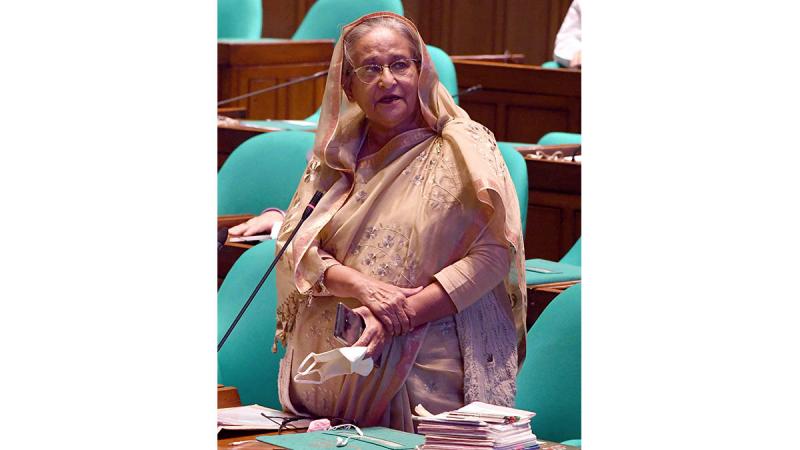 Prime Minister Sheikh Hasina on Monday said BNP has carried out the recent arson attacks on buses on the day of the by elections to make the polls questionable and malign the government.

“There was no reason to set fire to buses. But why did they do so? It was to make the election questionable when they are not getting votes of the people and lost public confidence,” she told Parliament.

The Prime Minister made these remarks in reply to BNP MP Harunur Rashid’s demand for formation of a parliamentary body to find out who were behind the recent arson attack on several buses in the capital.

Sheikh Hasina said when two parliamentary by-elections were being held they all of a sudden set several buses on fire and are shifting blame on the government.

“We’re in power. As to why our government earns a bad name by setting fires to buses. Besides, it is our duty to ensure security to the people,” she said.

Thanks to technological advancement, those who are setting fire are being caught red handed as there are CCTVs in all places. It is clear who were behind the arson attack, she said adding that there are images of the culprits in her hand.

Several persons from their procession were seen setting fire to buses with a gas lighter, she went on.

Noting that now technology is advancing far and technology speaks, the Prime Minister played the record of a phone call conversation between a leader and a female activist of BNP in the House.

She said it is their old habit that they shift blame on the government after setting fire.  Because, there was problem in the foundation of the party. Ziaur Rahman had gripped the power amid the killings. The party he created knows the politics of killings, arms and violence better. They created Bangla Bhai and militancy, resorted to different bad deeds including corruption and money laundering.

Pointing at Khaleda Zia, Sheikh Hasina said their leader is also convicted in a case of embezzlement of orphans’ money.

Pointing at BNP MP Harunur Rashid, the PM said he should have raised the issue in Parliament after knowing his party’s information better.

She asked the BNP MP not to mislead the people raising untrue information in the House anymore.

She advised the BNP take the election seriously.

The PM said BNP actually lost the support of the people a long ago after coming in power with conspiracy in 2001. From October 2001, they resorted to different sorts of misdeed and then they resorted to arson violence and burnt many people alive.

She said BNP is trying to get mileage banking the trying time to give the government a bad name as the people are in trouble due to the fallout of Covid-19 pandemic. The government has been trying its level best to help the people and keep the wheel of the economy moving in this critical time.

The people have no trust and confidence in them. The people rejected them even in the 2008 general election and then the people moved away further from them due to their misdeeds.

Earlier, Harunur Rashid from Chapainawabganj-3 took the floor on the point order to place the demand for formation of a parliamentary committee comprising treasury and opposition MPs to reveal who were involved behind the arson attack on buses in Dhaka on November 12 last.

“(You) set the terms and conditions, we will complete the work within seven days. It should be revealed who were involved behind this incident and this should be placed before the nation,” he said.

He said BNP wants to know who were really involved behind the incident. BNP does not want to trade blame over the incident.