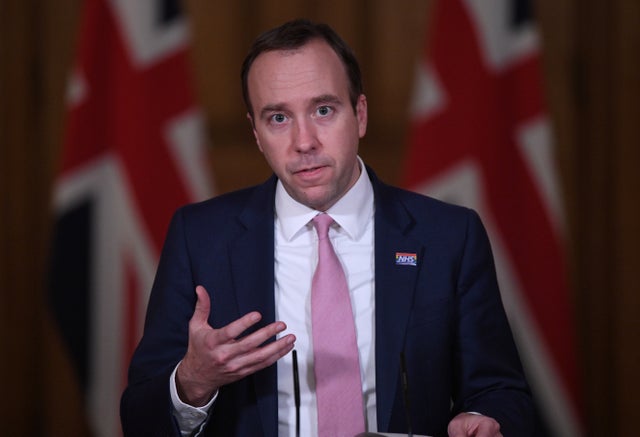 The UK has secured five million doses of a coronavirus vaccine found to be “94.5%” effective in preventing people from catching Covid-19.

Matt Hancock said the government had made an “initial agreement” with US firm Moderna for millions of doses after it was earlier revealed that the UK had not placed any orders for the vaccine.

The health secretary, speaking at a Downing Street press conference, said the vaccine could be available as early as spring next year, should it be approved.

“I stress that this is preliminary, the safety data is limited and their production facilities are not yet at scale,” he added.

He said Moderna’s successful vaccine trial is “excellent news” but urged people to “keep following the rules that we know can keep this virus under control”.
He added: “Across diagnostics and vaccines, great advances in medical science are coming to the rescue.

“While there is much uncertainty, we can see the candle of hope and we must do all that we can to nurture its flame.”

Mr Hancock said the newly procured Moderna vaccine, combined with orders from US firm Pfizer and British firm Astrazeneca, means the UK has more than 100 million doses on order.

He said the NHS has been instructed to deploy a rollout of the Pfizer vaccine, developed in collaboration with German firm BioNTech, by December 1.

However, the Pfizer and BioNTech vaccine still needs to finish trials and be approved.

“While we don’t yet have a vaccine, we can now have hope,” Mr Hancock said.
England’s deputy chief medical officer, Professor Jonathan Van-Tam said the Moderna results were “brilliant news”.

Prof Van-Tam told a Downing Street press conference: “Do I feel more encouraged in relation to another messenger RNA vaccine showing that it is making Covid-19 potentially in the future of vaccine preventable disease… absolutely so.

Prof Van-Tam had compared the Pfizer vaccine trial results to a goal in a penalty shoot-out and he continued the comparison following the Moderna data.

“It’s the second penalty now, that’s also gone into the back of the net.

“So we’re starting to feel in a better position.”
Moderna intends to submit an application for an Emergency Use Authorisation with the US Food and Drug Administration shortly and will submit further data on the vaccine’s effectiveness and safety.

The firm’s final-stage clinical trial is ongoing and includes more than 30,000 people in the US.

The interim analysis included 95 participants with confirmed cases of Covid-19, of which 90 had received the placebo and five the active vaccine.

The 95 cases included 15 older adults – aged 65 and over. This included 20 people who were not white – including 12 of whom were from Hispanic or Latino/a backgrounds, four African Americans, three Asian Americans and one who was multiracial.

Severe cases of coronavirus were also examined, including 11 severe cases in the first interim analysis.

All 11 cases occurred in the placebo group and none in the group which had received the vaccine, known currently as mRNA-1273.
Moderna said its available safety data does not indicate any significant safety concerns.

The vaccine was generally safe and well tolerated, and the majority of adverse events were mild or moderate in severity, it said.

But these effects of the injection were generally short-lived, Moderna said.

The 94.5% efficacy from this analysis could drop as further results from the clinical trial are announced.