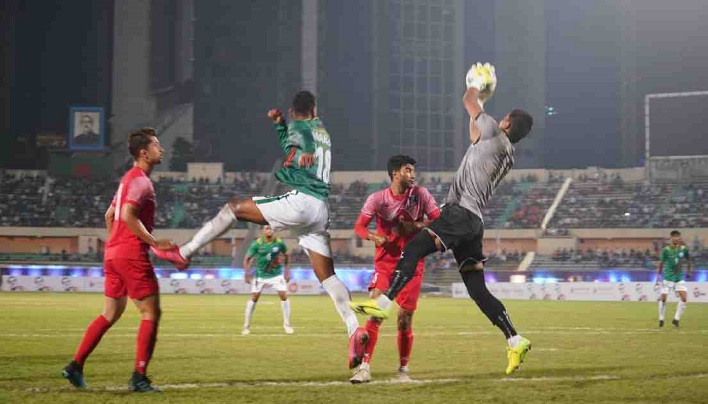 Hosts Bangladesh need a draw to win the two-match Mujib Borsho FIFA International Series 2020 against Nepal in the series-deciding match at Bangabandhu National Stadium on Tuesday.

The match will kick-off at 5pm (Bangladesh time) with maximum 8,000 spectators allowed in the stadium following health guidelines.

Like the first match, Bangladesh Television will telecast the match live while Bangladesh Betar will broadcast the running commentary.

Bangladesh dominated the two-match series (1-0), first of its kind in South Asia during Covid-19 pandemic, beating Nepal after five years by 2-0 goals in the first match last Friday at the same venue.

With Friday’s victory, Bangladesh not only smartly returned to the international football after about ten months, but also took sweet revenge of their two consecutive defeats against Nepal.

But Bangladesh suffered a big blow as their British Head Coach Jamie Day tested Covid-19 positive for the second time on Monday after being diagnosed with coronavirus in a routine test last Saturday, a day after the victory over Nepal.

Jamie Day will not only miss Tuesday’s series decider but will also fail to accompany the Qatar-bound national team, scheduled to fly on Nov 19 to play their World Cup qualifying match against Qatar in Doha on December 4.

But Jamie Day may join the national squad in Qatar later after recovery.

This will be the first time Jamie Day will not be seen in the dug-out of the Bangladesh team since his appointment in May 2018. Assistant coach Stuart Watkiss will be in charge in his absence.

Two categories of tickets will be released for the match with the VIP ticket costing Tk 500 and gallery tickets Tk 100 each.