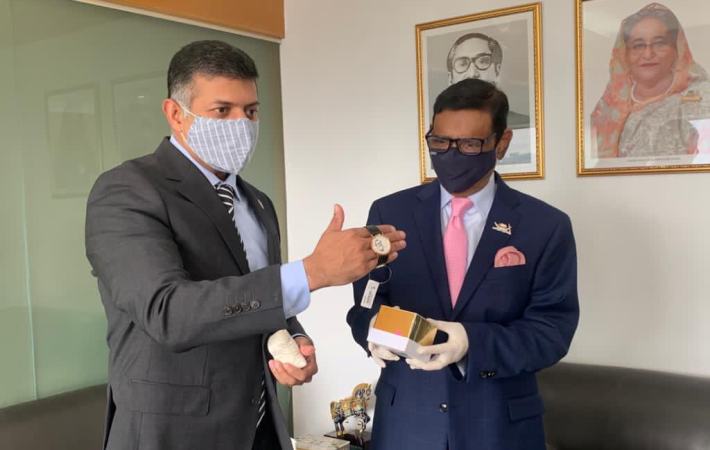 A limited series of Special Edition wristwatches designed and commissioned by High Commission of India were unveiled on Tuesday by Minister for Road Transport and Bridges and General Secretary of Awami League Obaidul Quader and High Commissioner Vikram Doraiswami.

The watches bear the image of Bangabandhu Sheikh Mujibur Rahman and his signature on the dial and represents the timelessness of his message as well as his eternal relevance, said the High Commission of India in Dhaka.
Speaking on the occasion, Obaidul Quader recalled the shared history of the Liberation War which is the bedrock on which the India-Bangladesh bilateral relation is built.

High Commissioner Shri Vikram Doraiswami emphasized that while Bangabandhu is the Father of Nation of Bangladesh, he is also a hero to the Indian people.

It is only natural that Indians also wish to celebrate Mujib Borsho with the same affection and respect as they did when he visited India in January 1972, en-route to Bangladesh upon the country’s liberation.

Prime Minister of India Narendra Modi had paid tribute to Bangabandhu during the commencement of Mujib Borsho commemorations on March 17, 2020.

Calling Bangabandhu a courageous leader, Prime Minister Modi had emphasized that Bangabandhu’s life was an inspiration to all.

These special edition watches were designed and specially manufactured in India for High Commission by TITAN, the celebrated watchmaking division of India’s multinational TATA Group.