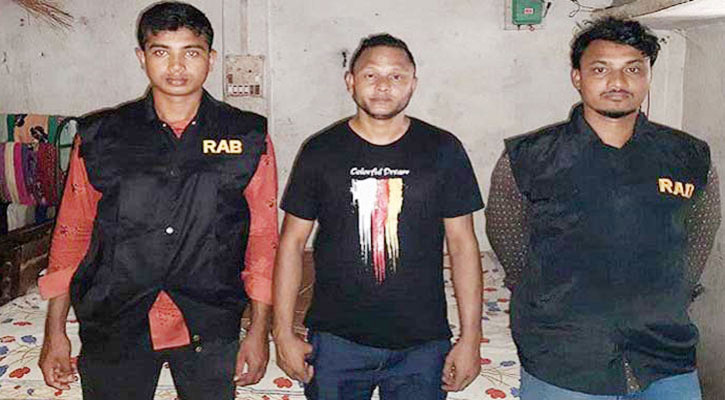 The members of the elite force arrested Mohsin Talukder, 25, son of Azad Box Talukder of Talukderpara in Sylhet sadar upazila, from Ronoshi village in Dakshin Sunamganj upazila today around 11:15am.

Earlier, sub-inspector Mahbub Morshed filed a case with Jalalabad Police Station in Sylhet against Mohsin under the Digital Security Act on Monday night.

Earlier, Mohsin threatened to  kill the cricketer after coming on live on his Facebook account ‘Mohsin Talukder’ at 12:07am.

Showing a big machete, Mohsin said that Shakib would be killed as he inaugurated a puja programme in India.

He also said that he would cut Shakib into pieces. He scolded the cricketer with abusive language.

“If needed, I will go to the capital on foot to murder Shakib,” the youth threatened.

The youth came on live again on 6:04am and begged pardon from Shakib for his death threat. The youth also asked the cricketer to beg pardon from the people of the country.

During his second time live, he said that he did not give the threat being instigated by anyone.

He said that he wanted to give a chance to Shakib and other celebrities like him.

Refuting the allegation Shakib said, “I did not go there to inaugurate any puja programme. Someone else had inaugurated the programme before I reached there. I just lit a candle at the request of the organizer. If my lighting the candle hurts anyone, I beg pardon.”