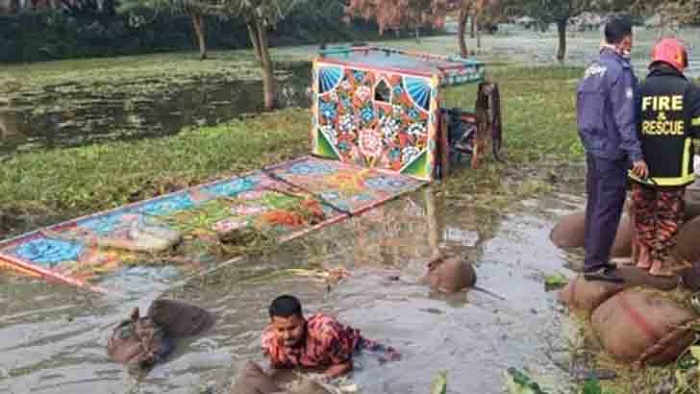 Nine people were killed and three others injured when a rice-laden human-hauler plunged into a roadside ditch at Sonapur-Barikbazar in Daipukuria union under Shibganj upazila of Chapainawabganj district early Thursday.

Seven of the deceased were identified as Babu, son of Erfan Ali, Tajemul Haque, son of Sheikh Mohammad, Mithun, son of Tajemul, Karim, son of Kabil Uddin, Milu, son of Amanul, Abul Kashem, son of Naushad and Ataur Rahman, son of Rehman of Shahbazpur area.
The accident took place around 4:45 am when the human-hauler with 12 farmers overturned and plunged into the ditch near Bhanga Bridge in the area, leaving the seven people killed on the spot and five others injured, said Farid Hossain, officer-in-charge of Shibganj Police Station.

On information, police and firefighters rushed to the spot and rescued the injured.

The injured were taken to Shibganj Upazila Health Complex where two others succumbed to their injuries.