Believe in peace, but also ready to protect ourselves: PM Sheikh Hasina 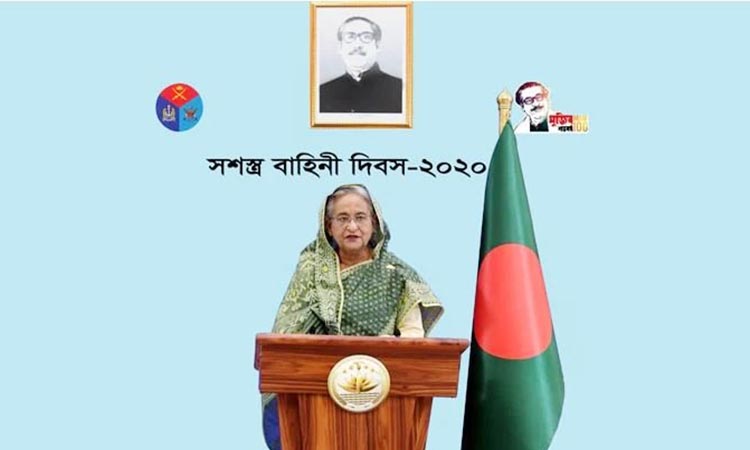 Bangladesh always believes in peaceful coexistence with all neighbours, but it is also ever ready to protect its sovereignty from any aggressive attack, said Prime Minister Sheikh Hasina.

“Our foreign policy drives with the Father of the Nation’s introduced key policy ‘friendship to all, malice to none’. Although Bangladesh believes in peaceful coexistence with all the neighbouring countries, we’re ever ready for and strongly committed to protecting the country’s sovereignty from any aggressive attack,” she said on Saturday.

The Prime Minister said this while delivering her pre-recorded speech through Bangladesh Television and Bangladesh Betar on the occasion of Armed Forces Day. Other private television channels and radios also broadcast her around 13-minute speech.

“As part of the continuation of that process, the Armed Forces are being rebuilt organisationally, provided with advanced training and decorated with specialised militarily adorns,” she said.

In the last one decade, Hasina mentioned, the government has developed every section of the Armed Forces with modern weapons and equipment.

“I would like to firmly say it the way the armed forces have been mordenised during the tenure of our government, it never happened in the past,” she said.

The Prime Minister briefly described various development programmes that have taken place in the Armed Forces.

She hoped that the members of the Armed Forces would be able to contribute more to the country’s defence and nation-building activities imbued with the strength of honesty, patriotism and professional skills.

The Prime Minister praised the members of the Armed Forces for their highest devotion and sacrifice while discharging their duties in any crisis of the country, including the Covid-19 pandemic as the frontline fighter.

To face the Covid-19 pandemic, she said, a good number of members of the Armed Forces had been infected and some of them died.

The Prime Minister praised the Armed Forces for brightening the country’s image abroad through discharging their duties with skills and sincerity in UN peacekeeping missions.

Turning to Bangladesh’s socioeconomic development, she said, “When many developed and developing countries are struggling with negative growth due to the Covid-19 pandemic, our growth increased to 5.24 percent.”

Hasina said the country’s remittance inflow, agricultural production and export have made a turnaround as its foreign currency reserve exceeded USD 41 billion.

“We’ve to move forward with our economic activities maintaining health rules. Inshallah, we’ll establish hunger- poverty- and illiteracy-free secular Golden Bengal as dreamt by the Father of the Nation,” she said.