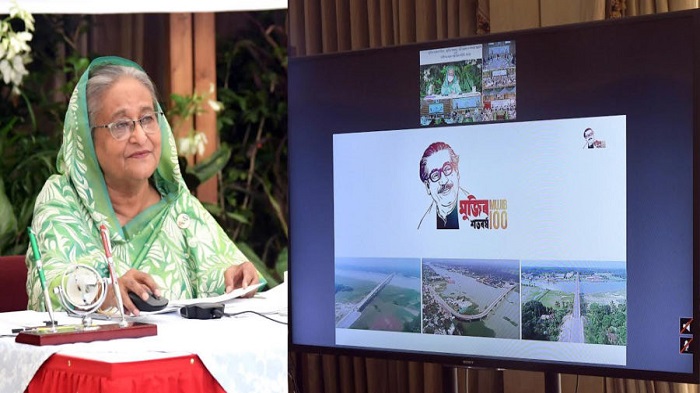 Prime Minister Sheikh Hasina on Sunday said the wheels of country’s economy are still in motion as the Awami League government was able to build a comprehensive communication network throughout the country.

“We built a comprehensive network of communication countrywide after Bangladesh Awami League government assumed office… As a result, the wheels of our economy are still in motion,” she said.
Expressing her firm determination to further improve the communication system for the betterment of country’s people, the premier said, “We have started many more works and hopefully will complete those, InshaAllah.”

The head of the government said these during a video conference from her official residence Ganabhaban marking the opening of three newly constructed bridges in Magura, Jessore and Narayanganj districts and Independence Square in Pabna as part of the ongoing development projects.

Saying that development is going on due to the continuation of the present regime, she said since the formation of the government in 2009, the incumbent government has been in the office till today and “we could be able to improve the fate of the countrymen.”

The premier mentioned that during the previous governments, there was potential for development but it was not done much. “People’s socio-economic condition will be better if country’s communication system becomes better,” she added.

Regarding the success of the government in tackling the COVID-19 crisis, she said, “As we have reduced the poverty rate, we have been able to increase per capita income also. Employment facilities are being created for the people. Besides, we have also proved that the quality of people’s lifestyle can be improved even at the rural level.”

Simultaneously, she said, her government is implementing the plans and various development projects by giving special focus on improving the country’s overall communication network, ensuring power facilities and marketing the products, attracting investment from abroad and keeping the economy afloat.
Referring the ruling Awami League, Sheikh Hasina, also the party president said, “We did not do anything suddenly. When the Awami League was in the opposition, we had a plan to do so.”